Gallop expects Sydney to raise the roof for Socceroos

FFA CEO David Gallop expects Sydney fans to get behind the Socceroos when Australia aim for “revenge” against Jordan in what looms as a critical World Cup qualifier on Tuesday March 29.

Gallop – along with Socceroos defender Alex Wilkinson – announced on Wednesday the Socceroos potentially-decisive final group match against Jordan would be played at Sydney’s Allianz Stadium.

EXCLUSIVE: Socceroos to face Jordan at Allianz Stadium on 29 March

Ange Postecoglou’s side are currently two points ahead of Jordan in the standings with two games remaining, with top spot – and certain progression to the final phase of qualifying – likely to hinge on that final game.

The Socceroos don’t have fond memories of playing Jordan, losing 2-0 away back in October in front of a raucous and intimidating home gallery.

“There’s a bit of revenge on the line having been beaten by Jordan,” Gallop told reporters pitch-side at Allianz Stadium.

“It’s likely it’s a match we’ll need to get a win in to top that group so there’s a lot on the line when we come out here. It’s a very big game for us and we’re delighted to be coming to Allianz for that game.” 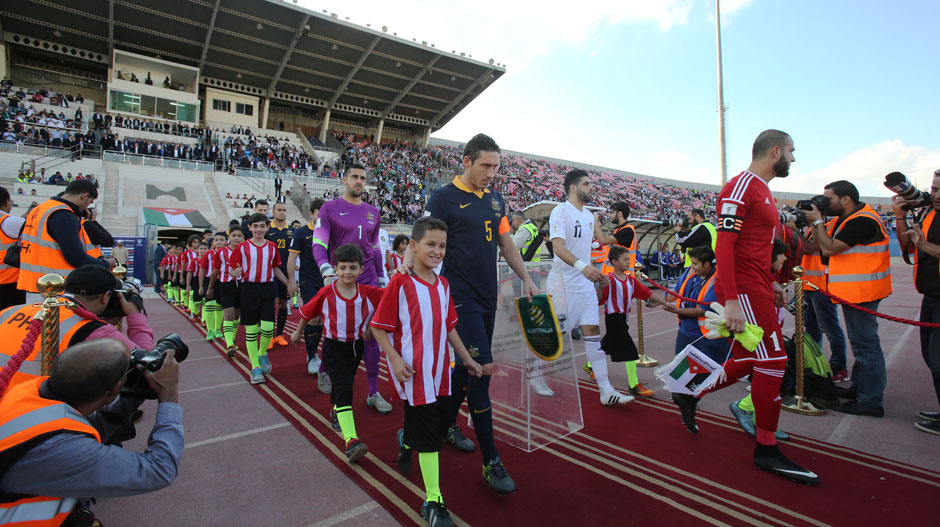 Asked how important it was to beat Jordan and top the group, Gallop said: “I’m sure Ange would say critical.

“We didn’t enjoy losing in Jordan. We want to top our group and go into the next phase full of confidence to make it to Russia.”

The clash at Allianz Stadium will be extra special for defender and Sydney boy Alex Wilkinson.

The 31-year-old has mixed memories of the venue, losing a couple of Hyundai A-League grand finals there with the Mariners but also getting his first taste of the national team there against Costa Rica in November, 2013.

“Playing for the national team is the pinnacle of any sport and it just makes it a bit more special if you can do it at home in front of your family and friends,” Wilkinson said.

“I’m a Sydney boy so in that regard it’s fantastic. It’s great we get to come home and all the boys look forward to it. In Jordan it was a pretty great atmosphere so it would be great on that night if Sydney could put on a show as well.

“It’s a massive game. In all likelihood it’s going to be the game that decides who finishes top,” he added.

“As we know you’re only guaranteed a spot in the next phase if you finish top. We lost over there and we want to set that right over here on our home turf.”