​Socceroo defender Ivan Franjic has recovered from his Asian Cup injury as he prepares for the challenge of facing Germany stars such as Mesut Ozil and Marco Reus on Thursday morning (AEDT) in Kaiserslautern.

Franjic injured his groin and hip during January’s Asian Cup, bravely playing for over 70 minutes in the final win over Korea Republic before being forced off.

After spending a number of weeks in Melbourne in rehab, he recently returned to Russian club Torpedo Moscow where he has spent the last couple of weeks amongst the first-team squad.

Franjic is in a battle with Tarek Elrich to start at right back for the Asian champions against the World champions in Thursday morning's friendly.

The former Roar man adds he’s raring to go as a battle with the likes of Ozil or Reus looms for the 27-year-old. 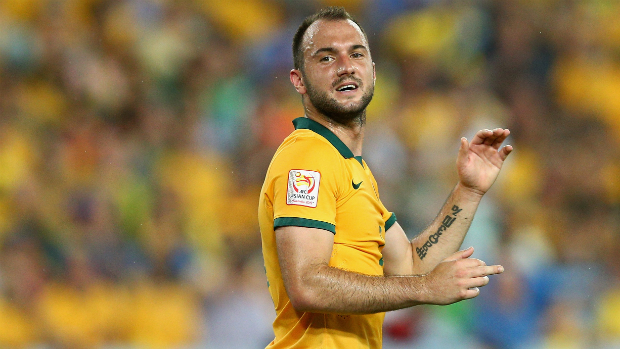 “They are great players but it’s also exciting to test yourself against the world’s best,” Franjic told FFA TV.

“They are world champions and you can really see where you at. I’m looking forward to the challenge as always.

“It’s exciting because they play attacking aggressive football, they press high and keep trying to score goals and win by as much as possible. They don’t try and sit on their lead so it will be exciting and a very good test.”

This will be the Socceroos' first hit-out since that historic Asian Cup triumph in Sydney and the first step towards preparing for World Cup qualifiers, which start in June.

While admitting confidence in the group is high following their continental success, Franjic declared their attitude won’t change moving forward and they are focused on achieving even more.

“Everyone’s humble here and very positive. We just want to keep doing what we’ve been doing because it’s what’s brought us success,” he said.

“It will be stuck with us forever winning the Asian Cup but we have to put it behind us as quick as possible because we have a lot of games coming up, starting with Germany and Macedonia then World Cup qualifiers after that.

“We can’t rest on our past, have to make a new future now.”