It’s that time of the year again – FIFA 18 is just around the corner and we’ve got the scoop on the best-rated players in the Caltex Socceroos.

The legendary striker will celebrate his 38th birthday this December, but he's still managed to earn himself a spot in the 70 club.

His pace might not be what it used to be, but he's still strong, and his finishing is up with the best in the Hyundai A-League.

Find him at the back post, and he'll still be scoring goals for your team in this edition of the game. 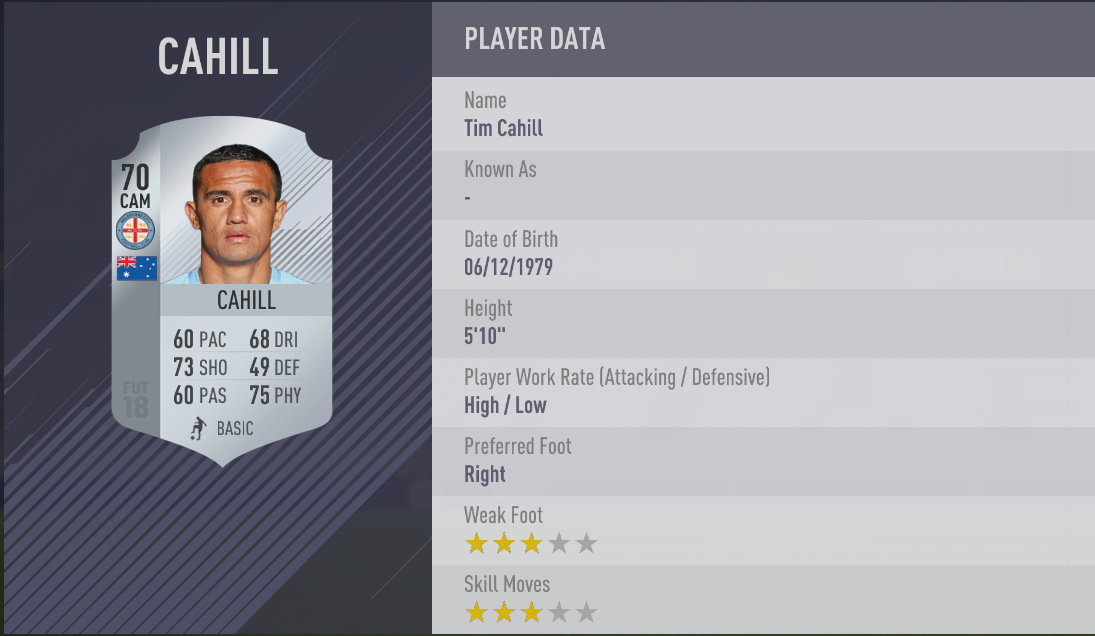 After an incredible season last year with Sydney FC, Vuka not only secured his dream move to Europe, but he's earned himself a rating of 70 in this year's FIFA.

Where last year he sat at a solid 66, which still made him one of the best keepers in the Hyundai A-League, this year he's smashed that and joined the 70 club.

His shot stopping is up there with any other Aussie keeper, and would be a great signing for a silver Aussie side. 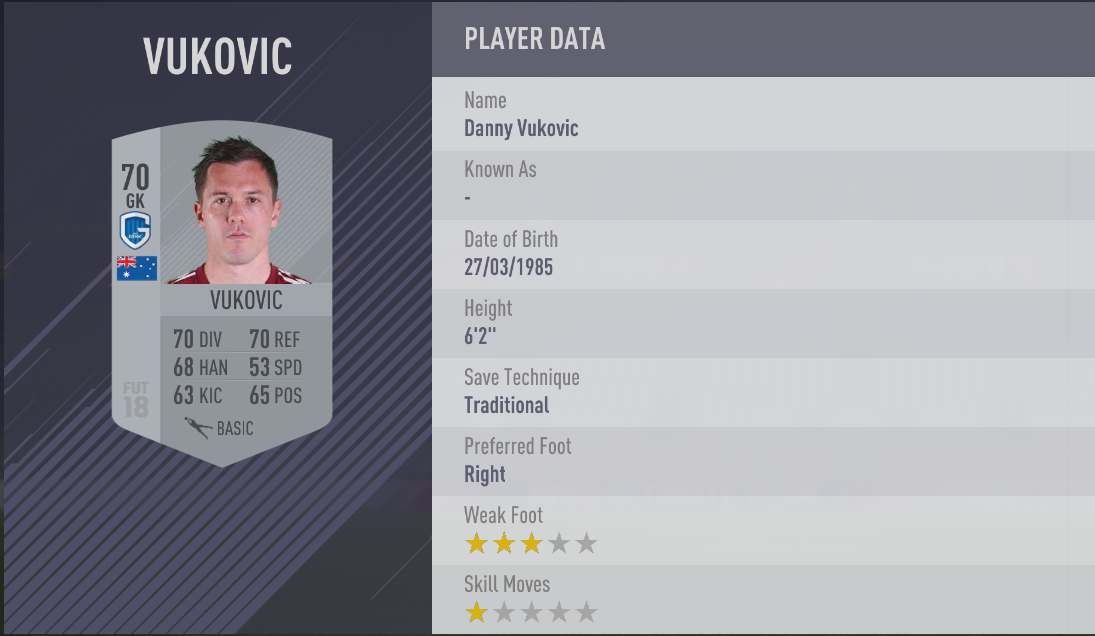 The Socceroos defender scrapes into the 70 club with a very good mix of stats to his name.

Big man Degenek is physically solid, and his pace would make him the quickest centre-half in the Hyundai A-League.

Technically, he’s showing some promise, and he has potential as a career mode buy. 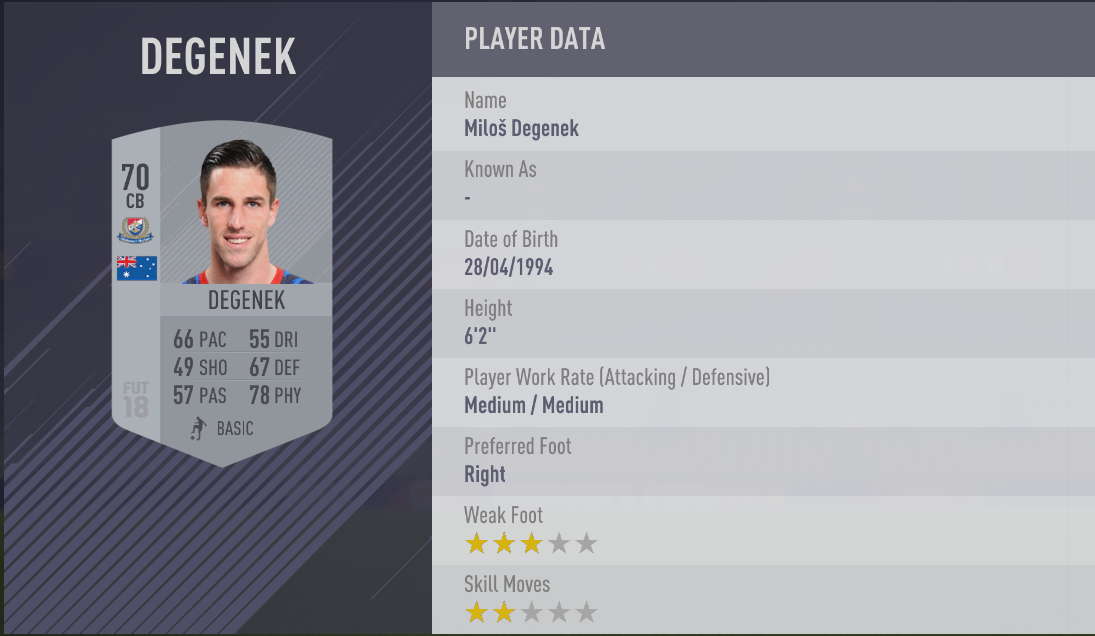 Big, strong, and technically solid. Tomi Juric has all the attributes to be a good target man for your FIFA 18 side.

And with four stars for his weaker foot, he’ll be able to hit them in almost any situation. 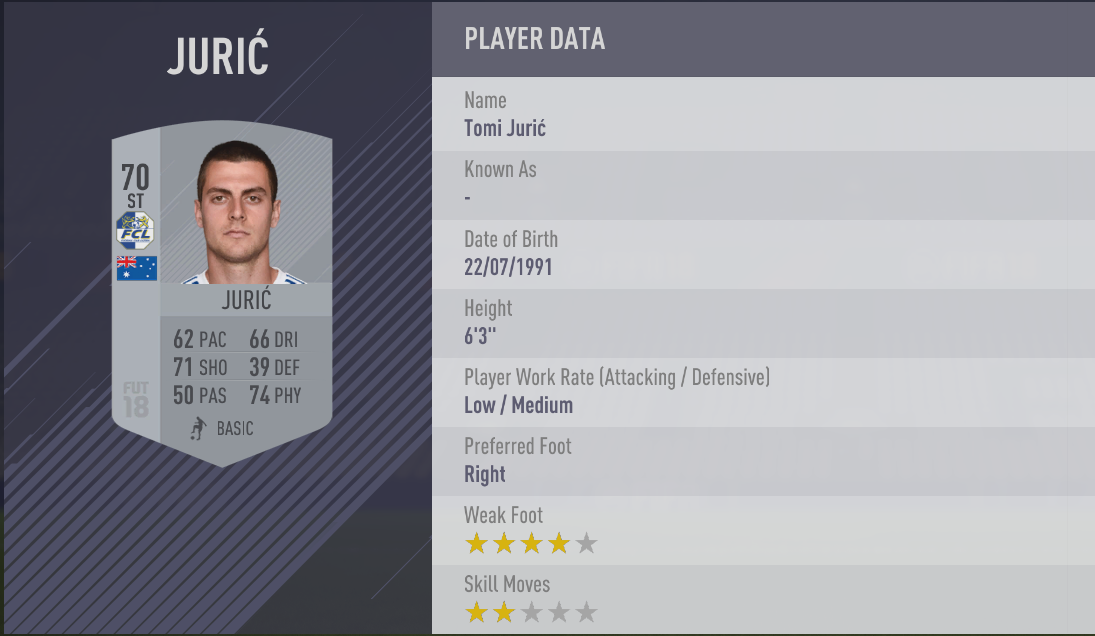 Mass Luongo rounds out the 70 club, with the 24-year-old looking a good addition to any Aussie midfield.

He’s quick, strong, and can dribble. Technically, his passing lets him down as a midfielder. At 64, comparatively he’s scored lower than the A-League’s best. 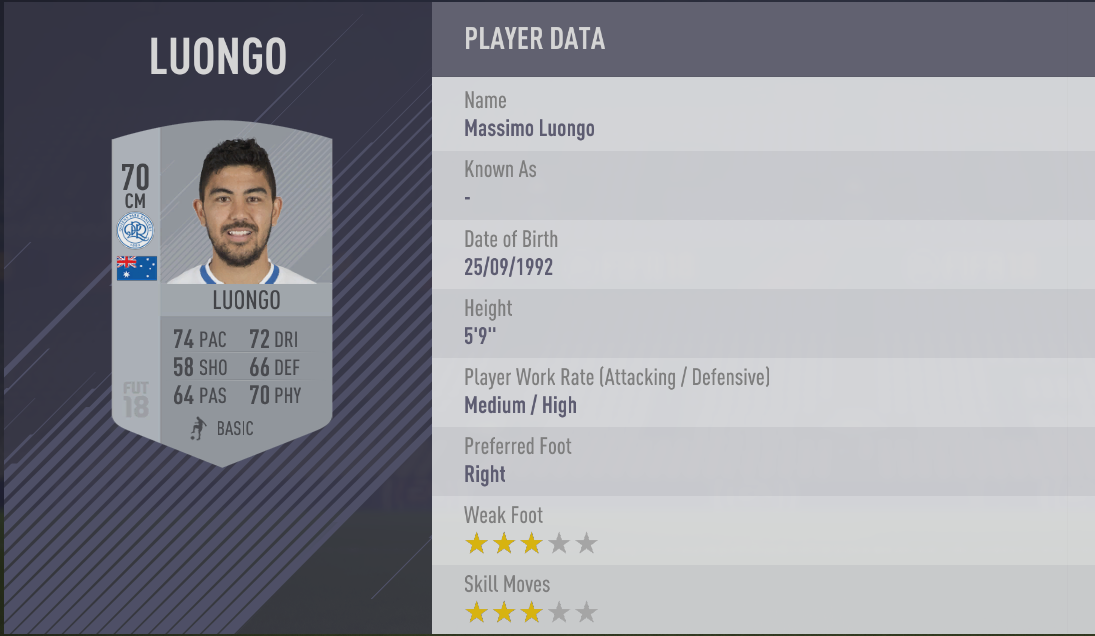 Strong, can defend, and relatively quick for a centre-half.

He’s technically not much better than Degenek, but the Bristol City captain’s defensive stats bring him up to a 71 overall.

Since leaving Preston, he’s lost a couple of points of pace, but he’s made up for it with his dribbling and passing numbers. 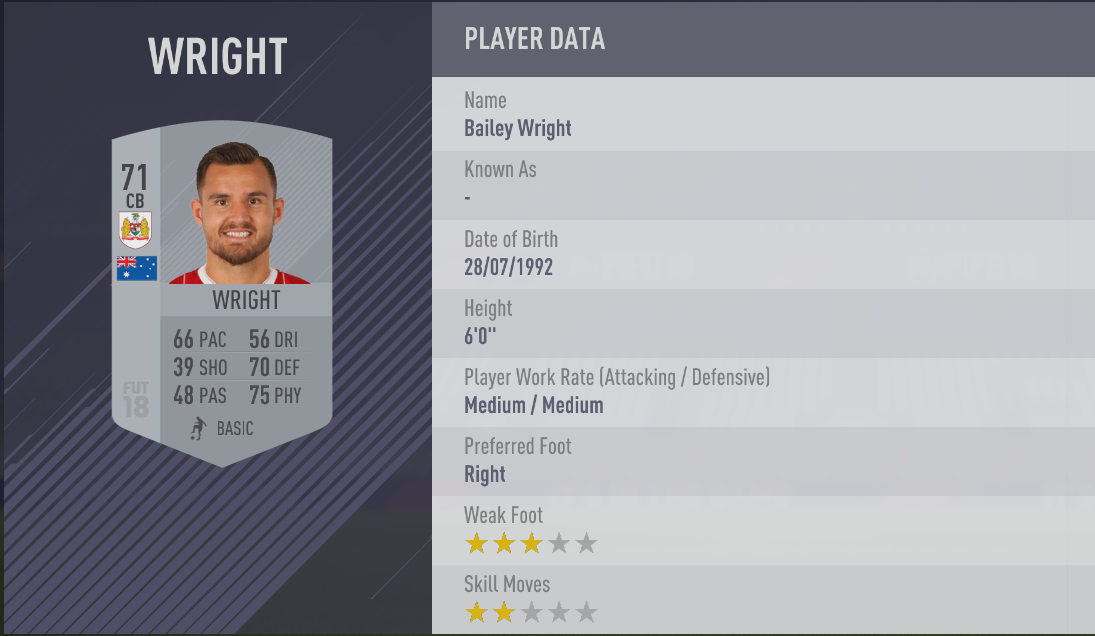 It’s hard to think of any Socceroo who’s had as stellar of a rise as Jackson Irvine, especially when you look at his FIFA ratings over the last few seasons.

And when you look at his numbers in more detail, he presents almost a perfect midfielder.

High attacking and defending work-rates, physical, quick, and has room to develop technically with his age. 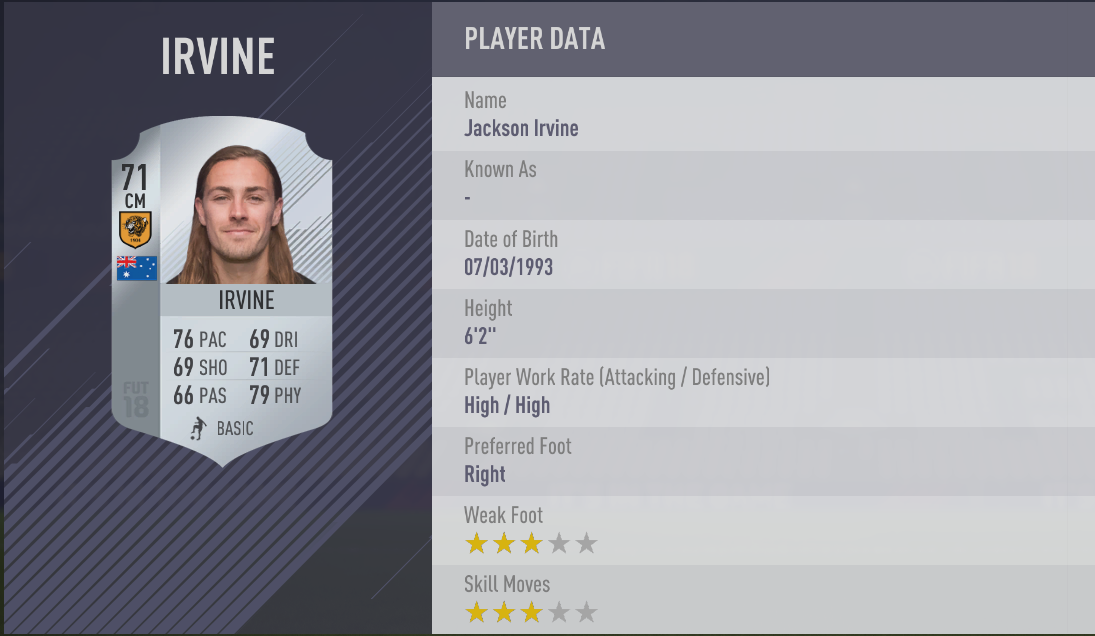 Robbie Kruse is quick, he can dribble, but he’s dropped two points since last year’s version of the game.

Perhaps the stint in China damaged his standings with the EA SPORTS scouts, but even though he’s gotten quicker, his technical abilities have dropped.

What hasn’t dropped is his skill moves; Kruse is still a whopping four stars – one better than Tom Rogic

If you’re looking for pace, you could do worse than Robbie Kruse’s 80, but his shooting, dribbling, and passing have all dropped since last year. 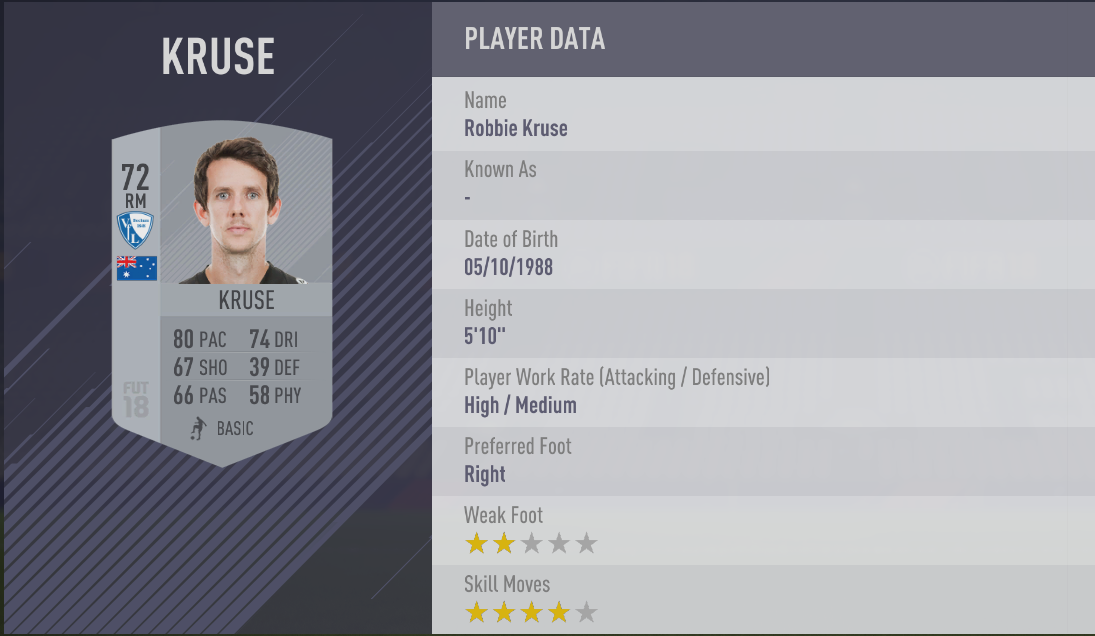 Last season, Mathew Leckie was clocked as the quickest man in the Bundesliga. Faster than Aubameyang

That hasn’t translated over to the FIFA ratings, because even though Leckie’s 93 Pace is very, very, very quick, it’s still three points short of the Gabonese winger.

His pace has grown this year, but his shooting and dribbling have both dropped.

If he keeps up his early form in the Bundesliga, the EA Sports scouts will have little choice but to give him a bump come Christmas. 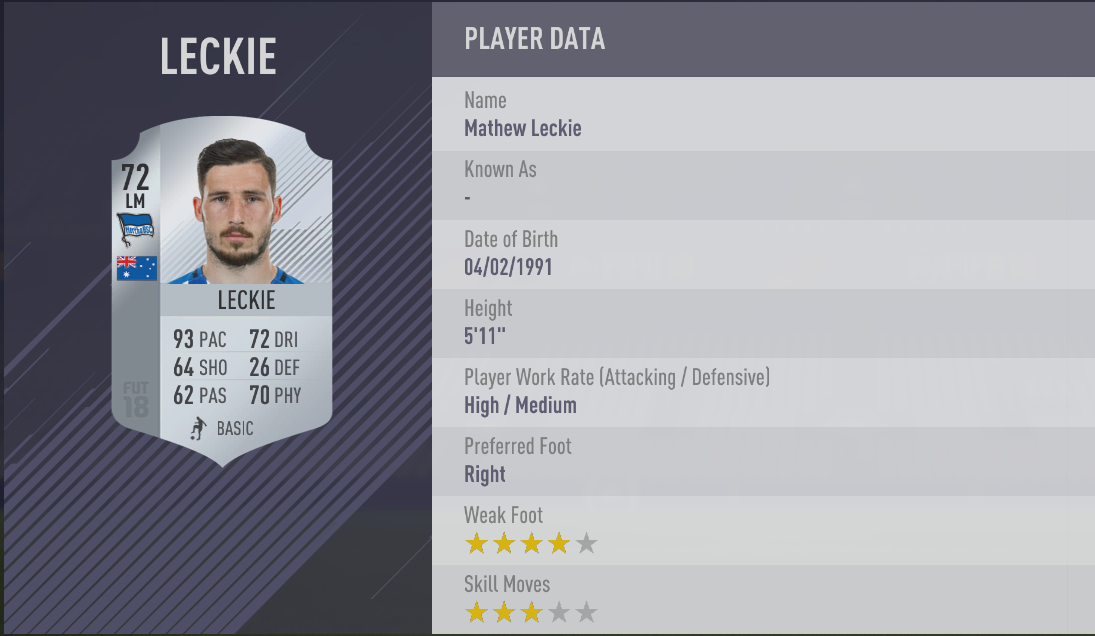 One of the big movers out of the Socceroos this season, Aziz Behich grew from a 70 Overall to a 73 this season, courtesy of a nine-point boost in his passing.

He’s quick, he’s technically good, and he’s the best Aussie full-back in the game by far. 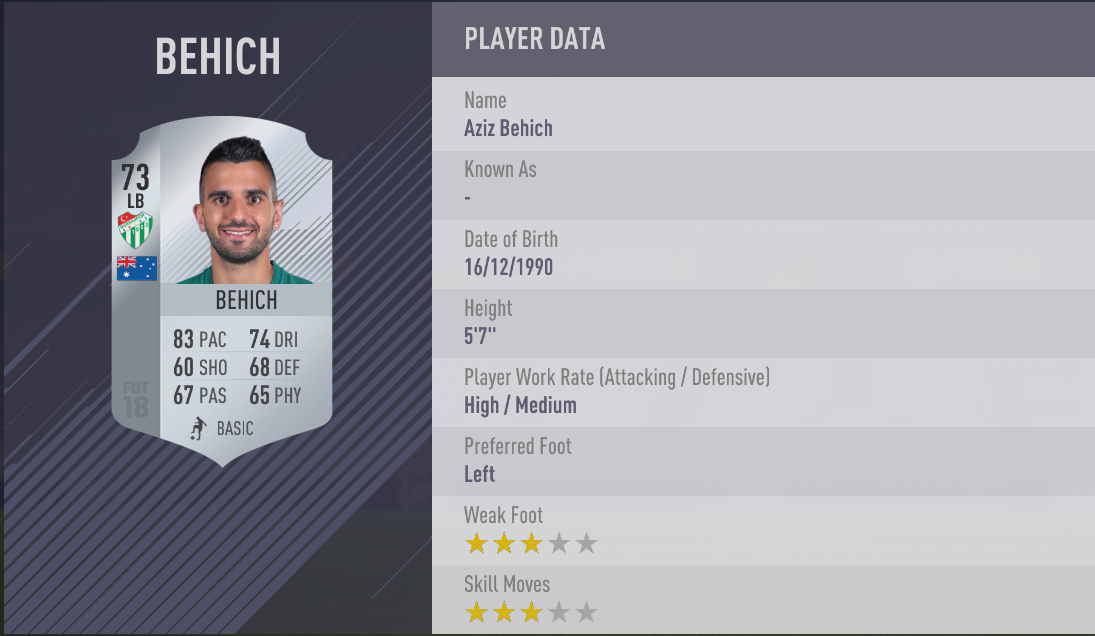 Fast forward three short years, and Macca has his European move, and two NAB Young Footballer of the Year awards.

There’s even more room for Jamie Maclaren to grow, but right now, he’s the Aussie striker you need to sign in FIFA 18. 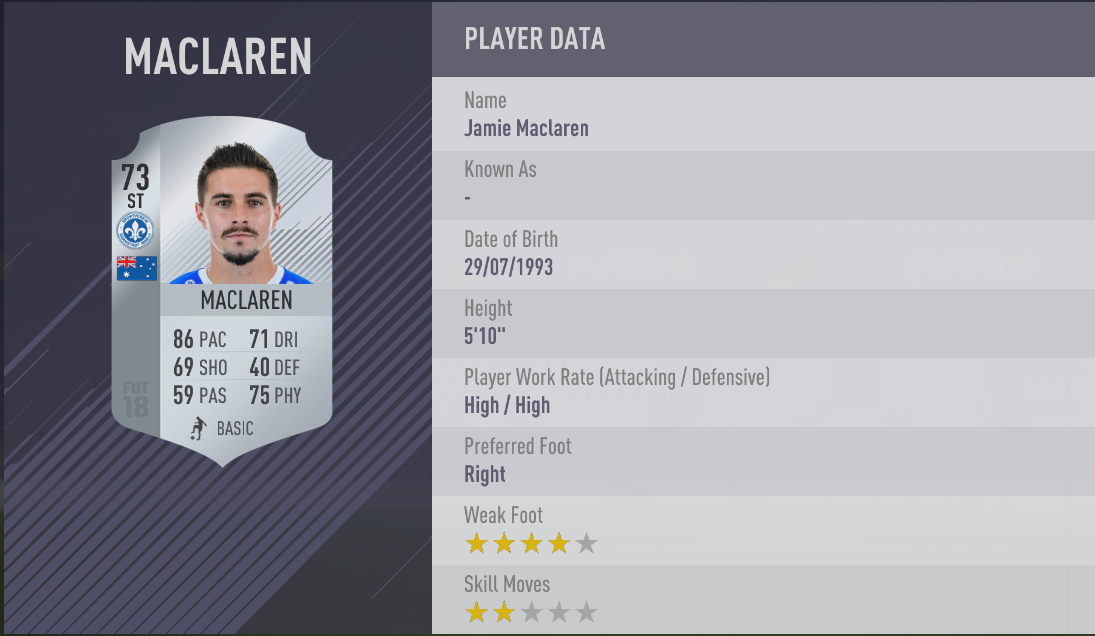 This will be the first time in three FIFAs that Mile Jedinak is not a Gold player.

The Socceroos skipper has dropped a couple of points from his 76 to 74, the first time since his 72 with Palace in FIFA 14.

While his dribbling has gone up by one, his stats across the board have dropped.

Here’s hoping that Mile can impress for Steve Bruce this season and earn himself a midseason upgrade back to the gold he’s so used to. 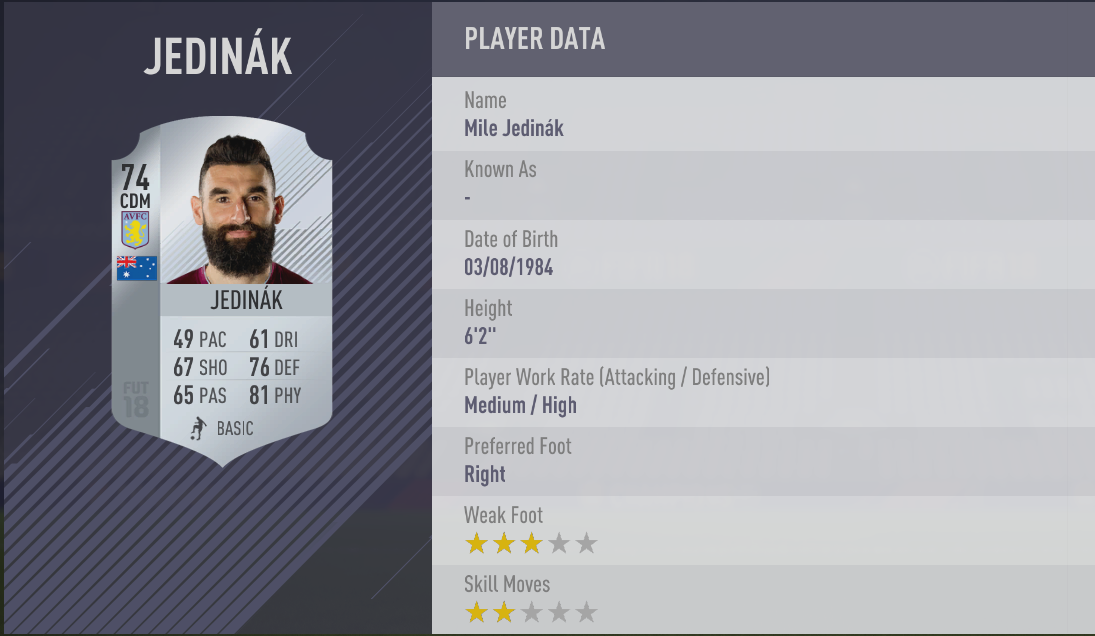 Mark Milligan is back in Ultimate Team, and he’s the sixth best Aussie footballer in the game!

After being absent since FIFA 15, Milligan is comparable to our skipper. A little bit quicker, and a bit better of a passer, and dribbler.

If you could only pick one of the two in your team, you’d have to choose between Jedinak’s defensive and physical abilities, or Milligan’s versatility. 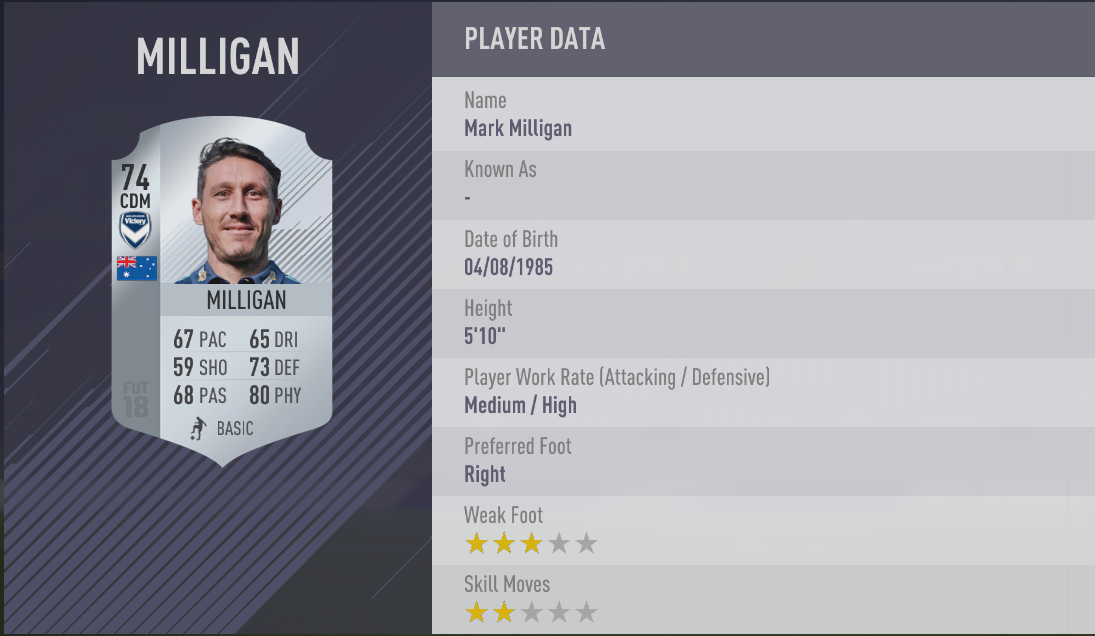 He might’ve been an integral part of getting Stuttgart promoted back to the Bundesliga, but this season Mitch Langerak made the move to Spain.

Despite making 34 appearances and playing more than 3000 minutes last season, the scouts at EA SPORTS have dropped Langerak’s rating by one.

How? His handling is better, his positioning has dropped by one, but his distribution has fallen by 22 points.

Despite this, Langerak is still a top shot stopper, and would be a worthy signing for any FIFA player. 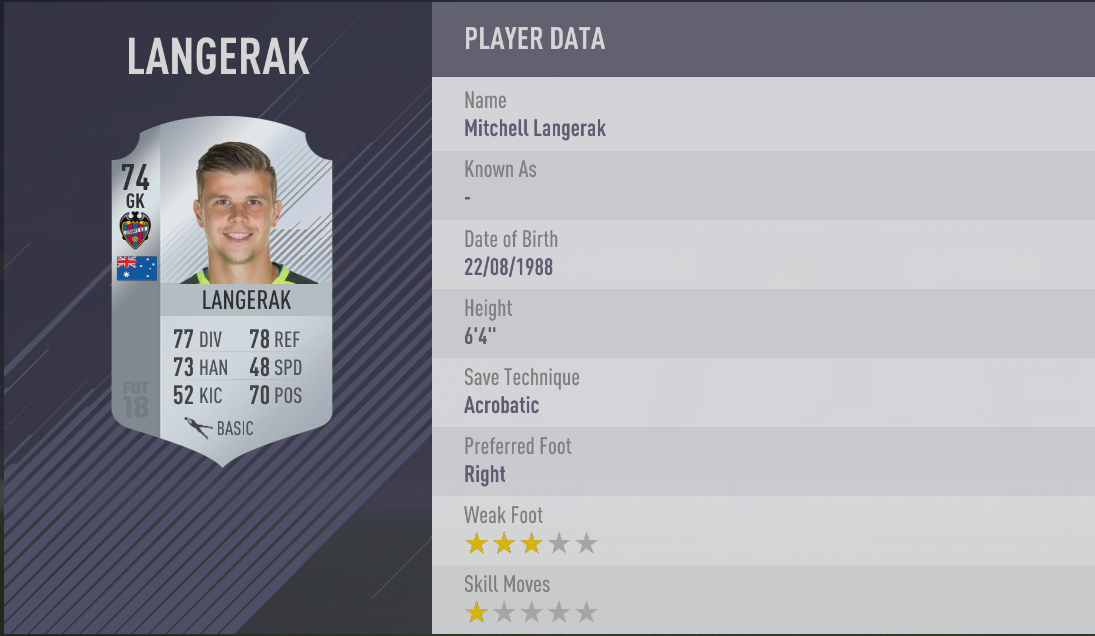 The scouts at EA SPORTS must be paying close attention to James Troisi.

After giving him an international man of the match card for his performance against Chile – and a subsequent temporary rating of 81 – they’ve decided to bump him up again this season.

His 74 puts him on par with Tom Rogic, but a very different kind of attacking midfielder. 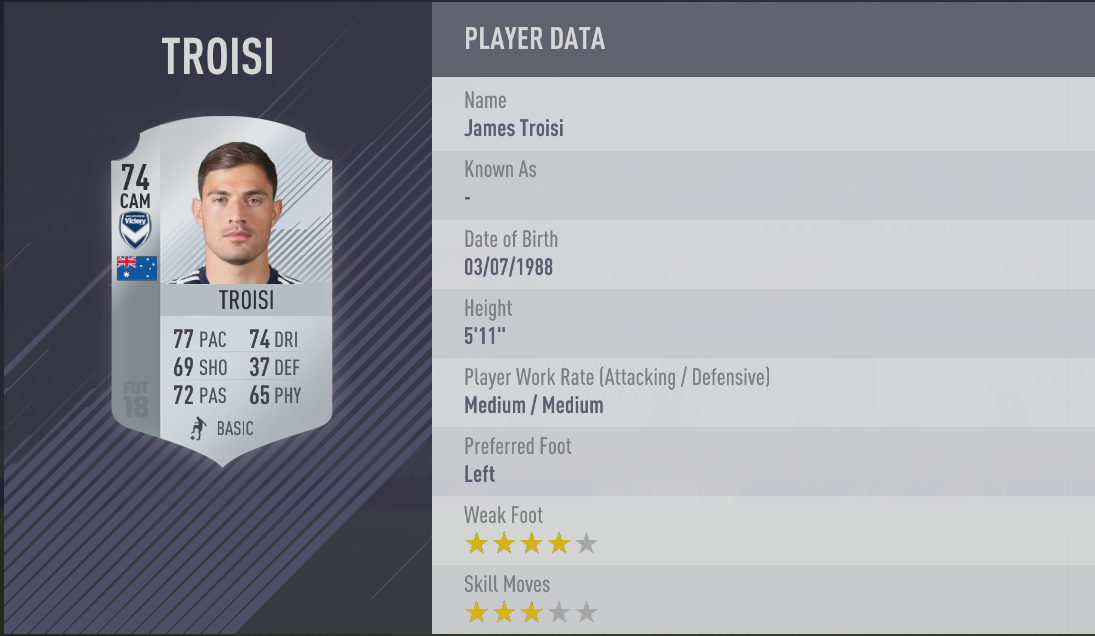 Tom Rogic keeps growing, but you can’t help but feel that at 74, he’s still a little bit undervalued by the scouts at EA SPORTS.

Anyone who’s seen Tom Rogic with the ball at his feet would disagree, given his futsal background.

Alas, it’s up to him to put in a good showing this season, keep impressing, and earn his points from the scouts.

How much more he can grow in Scotland is anyone’s question – he’s already the seventh highest-ranked player in the Scottish Premier League. 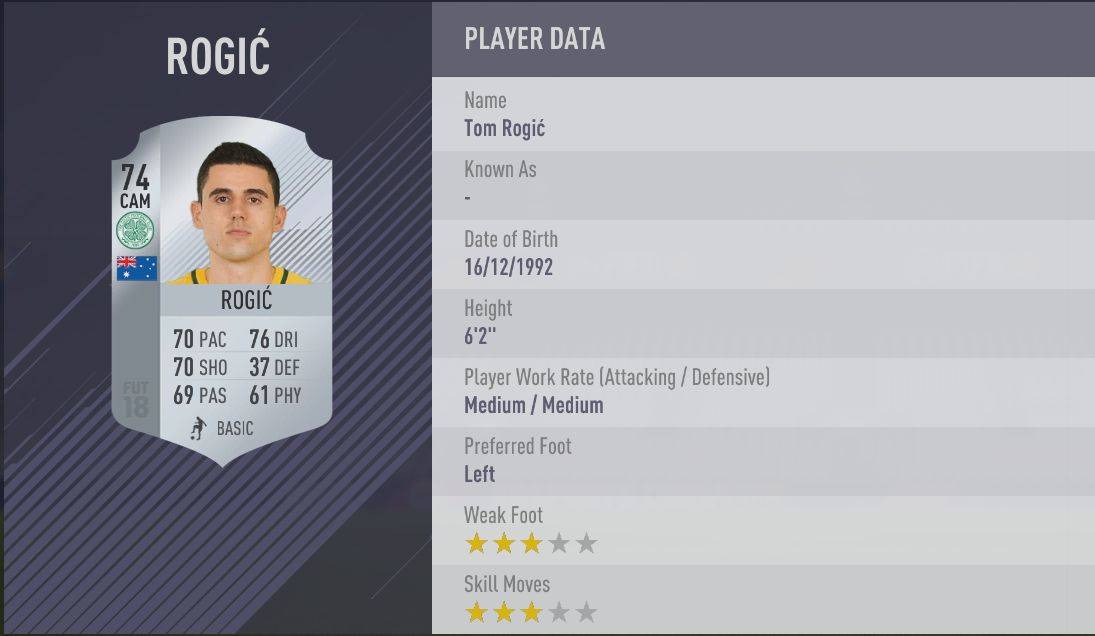 At the release of FIFA 17, Maty Ryan looked on top of the world. He’d just come off of a stellar season at Brugge and secured a dream move to Valencia.

After a year fighting for a spot at Valencia, he’s dropped a couple of points as he makes his move to Brighton.

The good news is, if he continues to get game time at Brighton and impresses, his rating is only going to go up.

His shot stopping abilities were reeled in this season, but his distribution has been bumped up to a whopping 90, even better than Claudio Bravo and David De Gea were in FIFA 17. 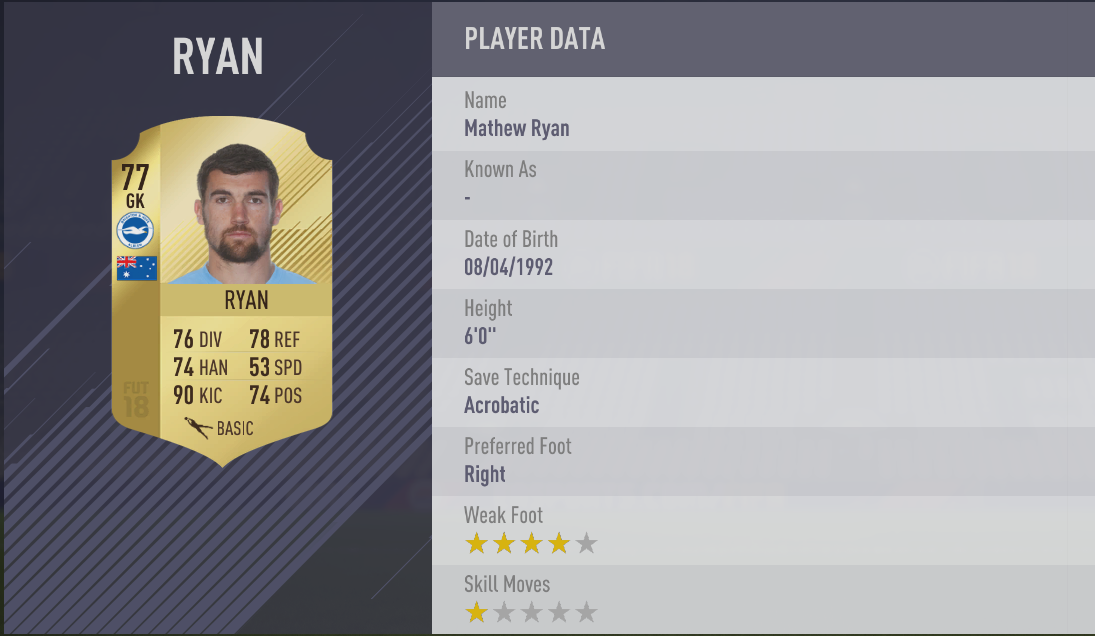 Aaron Mooy has come a long way from the scruffy-haired blonde at St Mirren in FIFA 12.

His passing is his best attribute at 77, closely followed by his strength, and then his dribbling.

Couple that with his decent pace, shooting, and defending, it leads to a very balanced midfielder to take out the title of best Aussie in FIFA 18. 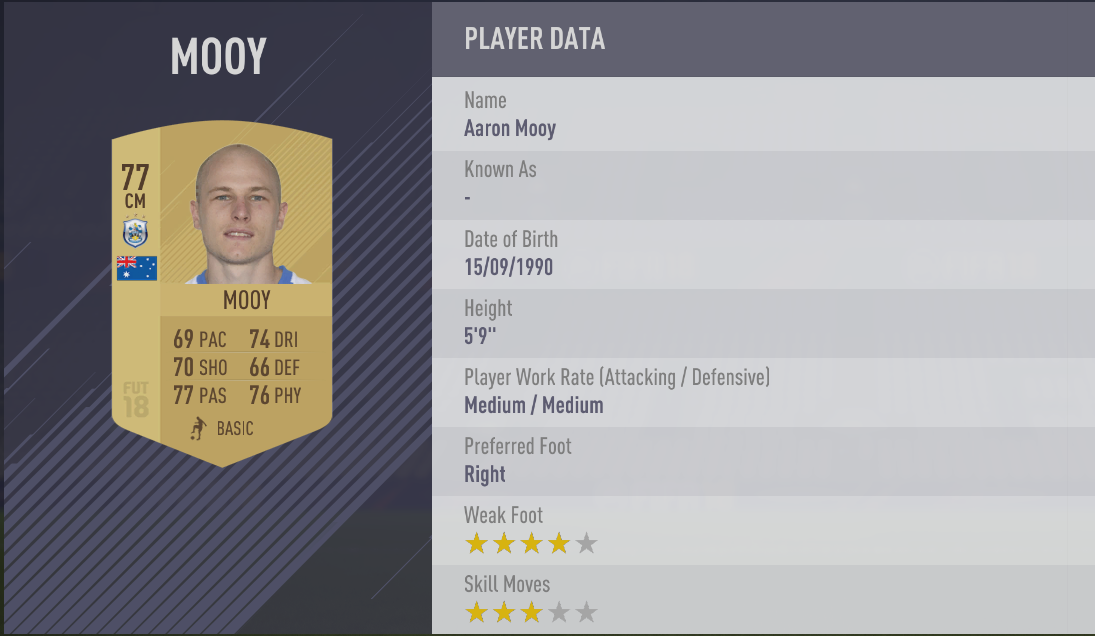