Football Federation Australia (FFA) has today welcomed the announcement that the Nine Network will broadcast the Caltex Socceroos’ two 2018 World Cup Qualifiers against Saudi Arabia and Japan over the coming week.

The Nine Network will provide a simulcast broadcast of the matches alongside Fox Sports, in a huge boost for football fans around Australia. The deal includes all remaining final stage 2018 FIFA World Cup Qualifiers through to September 2017.

The Caltex Socceroos take on Saudi Arabia in Jeddah on Friday morning (4.45am AEDT) before flying home to play Asian Rivals Japan at Docklands Stadium in Melbourne on Tuesday night (kick off 8pm AEDT). Tickets for the clash are still available by clicking here.

GALLERY: Caltex Socceroos sweat it out in Saudi

“This is a great result for football, tremendous news for Socceroos fans around Australia,” said FFA CEO David Gallop. “We welcome the undeniable sports broadcast expertise of Channel Nine on board for what will be two massive games for the Socceroos in the road to the 2018 FIFA World Cup. 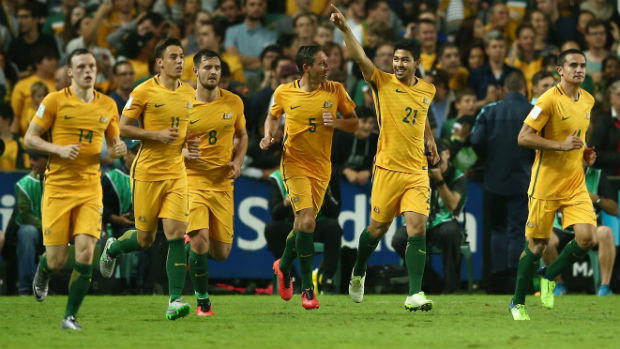 “The game against Saudi Arabia is a top of the table clash with both teams winning the first two World Cup Qualifiers and the match against Japan is one of the showpiece international matches in Asian Football.

“We have always stated our desire to have a commercial free to air network to work with Fox Sports in delivering football to the Australian public and this is a positive sign that football is valued highly by the commercial FTA networks.”

Ange Postecoglou’s men sit on top of Group B in final stage qualifying for the 2018 FIFA World Cup, in front of Saudi Arabia only on goal difference. It promises to be a massive clash in front of 65,000 fans in Jeddah.

The Caltex Socceroos will then fly to Melbourne to renew its rivalry with Japan at Docklands Stadium on Tuesday night (11 October).

Tickets for the Australia v Japan match in Melbourne can be purchased through www.socceroos.com.au/tickets.