Exhausted Leckie ready for his biggest ever game

Mat Leckie hasn’t played in a final before. So Saturday night’s Asian Cup final will be extra special for the Socceroo striker who admits he was very tired after Australia’s 2-0 semi-final win over UAE in Newcastle.

Leckie played a key role in the attacking third as well as doing his fair share of defensive work against an attacking UAE line-up who came back strongly after conceding two early goals.

“All games are taxing in their own ways but for me it was pretty tough tonight,” Leckie told reporters after the game.

“Because we didn’t have so much control of the game. Their full backs were overlapping which meant I had to drop off as well.

"For me it was one of the toughest games so far. I was happy to go back and defend for the team because it’s what’s needed to be done. I’m a bit tired, my legs are sore,” he said.

The early goals from Jason Davidson and Trent Sainsbury gave the Aussies the upper hand. Though Leckie admits it wasn’t the most decisive performance by the Green and Gold.

“We’ve been very attacking in every game we’ve played. We scored very early this time compared to the other games but I think overall it wasn’t the best game for us. But we ground out a result. Sometimes games can’t be as pretty as you want them to be.

“In every game so far we’ve created enough chances to score two goals early. But today was the day they both went in. It was a bit of a shock. We always know in the attacking third we’ll get our chances.” 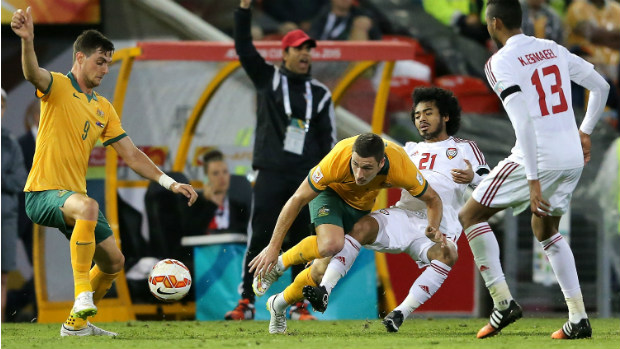 Leckie and the Socceroos now have important recovery work ahead of the final in Sydney this Saturday night – his first final.

As for playing a side in the final that beat the Socceroos in the group stage - a 1-0 loss - that could be a blessing in disguise, said Leckie.

" We were probably the best side on the night [in the group stage loss], we just couldn’t put the chances away, so what we need to make sure is to create chances and keep possession and keep them moving. Be more clinical on the night.

"It’s better that we lost to them in the group stage. We just can’t let that happen again in the final. We’ve just got to be clinical and take our chances."

Little wonder the German based striker says it’s his biggest ever game.

“Club football is one thing but national team it’s the biggest thing for me and a lot of us here. I’ve never been in a final. So I’m very excited."