De Silva living his dream with the Socceroos

Daniel De Silva is relishing the chance to soak-up as much as he can from the likes of Tim Cahill and Mile Jedinak during the Socceroos training camp in Dubai.

The 18-year-old is part of Ange Postecoglou’s squad currently in the UAE preparing for next week’s World Cup qualifying opener against Kyrgyzstan.

De Silva was a late inclusion in the squad for the injured Massimo Luongo and plans to make the most of the opportunity.

Being around the likes of skipper Jedinak, Cahill and co. is a dream for the former Perth Glory player who has signed with AS Roma.

“Just being able to learn on and off the pitch will be such a great thing for me and help my professionalism to become better.

“They have played at the highest level. Just watching them and what they do will definitely help my career.

“We’ve been here only a couple of days and the experience has been great. I’ve experienced what the culture is like and what the plan is moving forward with the Socceroos and what the future has in store for us.

“It’s early in the camp still but I’m getting a very good feel for it.” 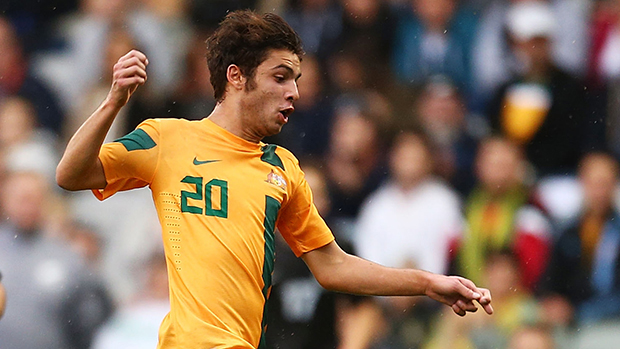 If De Silva does get on the pitch in Bishkek he would become one of the youngest-ever players to make their debut for the Socceroos.

“I’ve always been the youngest normally anywhere I go,” he said.

“I’m just going to enjoy this experience. If I get a chance to play that would be fantastic. I’m just really happy to be a part of this squad and a part of the plans for the future.

“It would probably be the best moment ever so far,” he added about the feeling of making his debut.

“It’s always been a dream of mine since I was a little boy and started playing, to play for the Socceroos. For it to come real, hopefully soon, it would be one of the greatest moments of my life for sure.”