The Socceroos greatest-ever goal-scorer had offers from all over the world including England, Qatar, UAE and China.

But after speaking to some influential people over the last 24 hours, he decided Shanghai was the best place for the next stage of his illustrious career.

"I've been on the phone to (former Everton manager and Real Sociedad boss) David Moyes, I spoke with (former Arsenal and New York star) Thierry Henry and also the chairman Bill Kenright at Everton and (Socceroos coach) Ange (Postecoglou) this morning," Cahill said on Fox Sports.

"I've made the decision purely because I've played in the Premier League and did really well and it was a massive compliment to get the phone calls I did last night and to speak to Moyes about possibly going to La Liga.

"You see in the (Asian Cup quarter-final) game that we played against China, millions of people watched it and I'm someone who is embracing culture and a different aspect of life.

"I'm at an age where I want to give something back to football and still play at a high level...it's all about doing what I want to do as footballer and trying different leagues and I think it's exciting.

"To still be in demand and have the offers I've had is special but this will be massive for me as a player on and off the park."

Cahill said he had talks with Sydney FC officials after last year’s World Cup  "but as far as offers, there was nothing".

“I can openly say that Tony Pignata (Sydney FC CEO) is a gentleman, he did reach out after the World Cup but realistic offers there were none,” the 35-year-old said.

“I’m an ambassador for Australia and I want to make sure the kids know I’m following my dreams.

Having played at three World Cups and helping Australia win their first major piece of silverware at the Asian Cup, there are some suggestions Cahill may opt bow out of international football on a high. 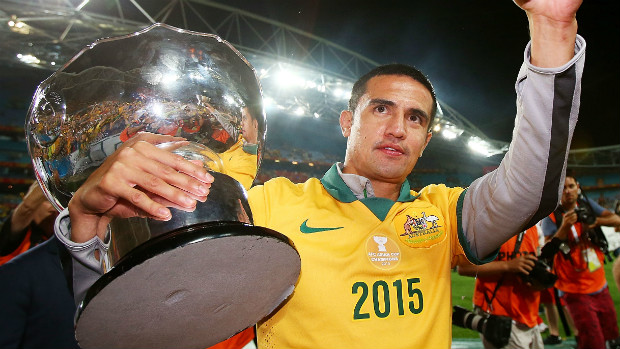 Asked about his Socceroos future, Cahill said: “My plans will be to support the boss.

“My vision for the last 14 months was to be a team player. It’s never been about me.

“The boss knows my plans for the national team. I’m always there for him on and off the park. I’ll always leave that decision to him, someone who has changed the footprint of football in Australia.”

Cahill was adamant his decision to head to China wasn’t financial but more about helping to grow the game in that highly developing market.

“I’ve never, ever chased the money. If I did I would have been in Qatar or China four years ago,” he said.

“I’ll make an impact in China, I promise you, on the pitch.

“I sat with my two boys and I told them about China ... the cultural differences, where we’re going to be living. They’re excited.”