Chile into Confeds Cup final after shootout drama with Portugal

The Caltex Socceroos' group opponents Chile are the first team into the FIFA Confederations Cup final after beating Portugal 3-0 on penalties on Thursday morning (AEST).

Goalkeeper Claudio Bravo was the hero for Chile in Kazan as he saved all three Portugal penalties to send his side into the Confederations Cup decider.

Chile, who drew 1-1 with Australia earlier this week in Moscow, also had been denied a clear penalty in the second period of extra-time and hit the woodwork twice in quick succession soon after.

But after scores were locked at 0-0 after 120 minutes, they wrapped up the win in convincing fashion from the spot.

Arturo Vidal, Charles Aranguiz and Alexis Sanchez were all on target for the Copa America champions, while Ricardo Quaresma, Joao Moutinho and Nani were all denied by Manchester City stopper Bravo.

Portugal captain Cristiano Ronaldo did not step up to take a spot-kick.

The match itself finished goalless after a largely drab 90 minutes, before springing into life late in extra-time.

On balance, it was a deserved victory for Chile, who also won both of their Copa America titles from the spot after the matches ended goalless.

A scything early throughball from Sanchez to Eduardo Vargas came to nothing when Portugal goalkeeper Rui Patricio dived at the forward’s feet, before Bravo kept out Andre Silva at the other end as the match started at a promising pace.

Those early chances proved not to be a sign of things to come, however, and it was not until Aranguiz sent a header narrowly wide just short of the half-hour mark that either side came close to troubling the scoreline again.

A wild slice on the half-volley from Aranguiz soon after saw another opportunity to break the deadlock come and go, though Chile were beginning to look most likely to go ahead.

After a largely disappointing first half, the match was crying out for a goal but Portugal's Andre Gomes offered a strong indication that he would not the man to deliver it.

He dragged an awful shot well wide of the target early in the second half. 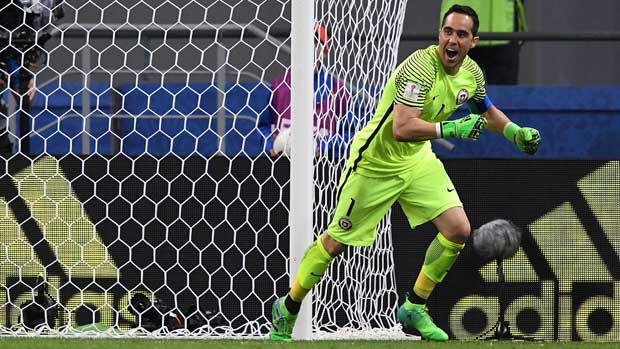 Ronaldo, who had been quiet since setting up an early chance for Silva, fired an effort straight at Bravo as the game started to open up, before lifting a free-kick harmlessly over from a promising position having stood ominously over the ball in trademark fashion.

The skipper then saw a shot deflected wide and miscued a header – the match careering inevitably towards the additional periods.

The first chance of extra-time fell to Sanchez, but the Arsenal man's header curled agonisingly wide having initially looked destined for the bottom corner.

Chile's penalty that never was came seven minutes into the second period, yet VAR was not consulted. Replays clearly showed the Portugal defender making contact with Silva's foot.

Then came Chile's woodwork frustration - a fierce Vidal strike bounced back off the right-hand post, only for Rodriguez's improvised effort on the rebound to hit the crossbar.

When the shoot-out came around, Portugal produced three poor penalties - the efforts from Quaresma and Moutinho were almost identical and Nani stuttered to a strike that failed to fool Bravo, sparking jubilant celebrations among the Chile squad.