On the eve of Australia's first 2015 FIFA U-17 World Cup match against Germany, captain Joe Caletti tells us the Joeys have nothing to fear.

Joe Caletti might be one of the most diminutive figures at the 2015 U-17 FIFA World Cup in Chile, but when it comes to spirit, he’s a giant.

At 1.62m, he’s the shortest player in the Joeys’ squad, but after just a few moments of watching Caletti on the pitch, it is obvious as to why Australia’s U-17 national team coach Tony Vidmar has picked him to captain the side.

He’s cool, calm, and collected under pressure. He leads by example, rallying his troops at every opportunity.

Those characteristics are imperative in his role as a holding midfielder for the Joeys, and a role that he seems to have been born to play.

Caletti is driven, optimistic, but also a realist.

He knows there are no easy games in the U-17 FIFA World Cup, but that only motivates him more.

“This is what you come to the FIFA U-17 World Cup for. 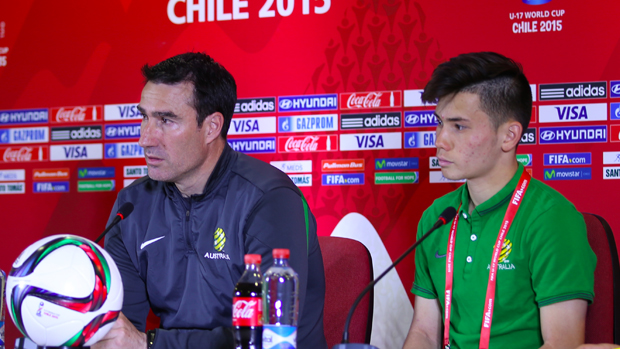 The Joeys lost out on penalties to the eventual winners of the 2014 AFC U-16 Championship North Korea in the semi-final stage.

At first glance, it doesn’t look good for the Australians, but Caletti is not paying attention to that.

“We’re ready to take them on and win the game.”

With the way the tournament is structured – the top two teams in each group automatically go through, along with the best four third-placed teams out of the six groups – a win could see the Australians progress.

It might seem like a tough task given the group, but Caletti and the rest of the Joeys have set themselves some lofty ambitions.

“Our expectations for this tournament are that we should get out of this group stage,” Caletti says confidently.

“We’re really focused on that, especially with our first game against Germany.

“If we get a good start there, I believe it can take us all the way.”

That ambitious attitude resonates across the entire squad, and it’s little surprise given 13 of the 21-strong squad have spent the last two years living, eating, and training together at the Football Federation Australia Centre of Excellence [FFA CoE].

Caletti is one of those 13 FFA CoE players that were selected for the FIFA U-17 World Cup squad, but another 11 missed out on the final cut.

Vidmar – who is also head coach of the FFA CoE squad – has reminded the FIFA U-17 World Cup squad that they aren’t just playing for themselves anymore, but also for those that missed selection.

It’s a mantra that’s bringing an already close group of players even closer.

There’s a real team spirit that resonates around camp in Chillan.

“This group of boys, we’ve got a lot of characters in there,” Caletti says with a cheeky grin.

“Great banter, on and off the field.

“But when it comes down to business, they’re 100 per cent focused, and they give their all to everything.” 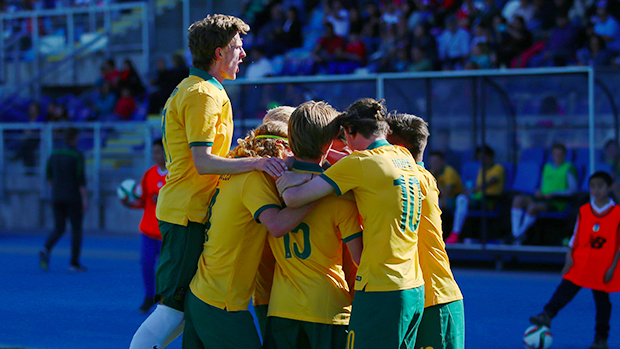 Such team spirit could be difficult to fathom given more than half the squad is from the FFA CoE, while the other half has been pulled from around the world.

Panos Armenakas is based in Italy, playing for Udinese, while Jake Brimmer is with Liverpool.

Thomas Prinsen is a recent addition from PEC Zwolle in the Netherlands, while Fortuna Dusseldorf’s Joshua Laws recently received his Australian citizenship after living in Glasgow, having grown up in Melbourne.

Three players are with Hyundai A-League champions Melbourne Victory, and one is uncontracted.

It’s a side Vidmar and FFA U-16/U-17 technical director Peter de Roo believe in, and one that Caletti is proud to be captaining.

“As a young boy I dreamed of playing for my country at any level,” Caletti says.

“I grew up watching the Socceroos on TV and dreamed of putting on the green and gold.

“But being captain, it’s another honour itself.

“I take great pride every time I put on the armband. 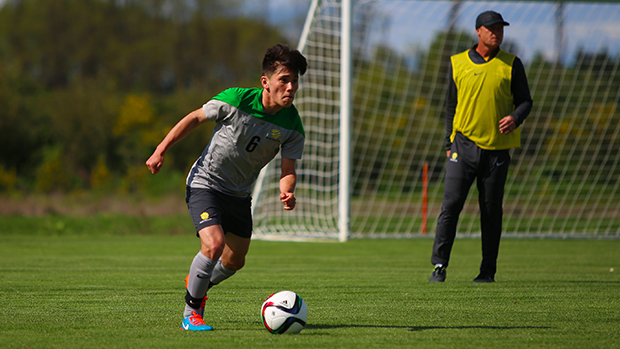 The next generation of Socceroos begin their 2015 FIFA U-17 World Cup Chile campaign on Monday, 19 October on SBS One.

Tune in to watch Joe Caletti and the rest of the Joeys make their mark on the world stage.