After Spanish keeper Jaume Domenech's super display for Valencia overnight in the Champions League, Socceroo Mat Ryan faces a challenge breaking back into the Spanish outfit's starting XI when he returns from injury next month.

Ryan started the season as Valencia’s first-choice gloveman after his move from Club Brugge but has been sidelined for almost a month with a knee problem.

It’s allowed Spaniard Jaume Domenech an opportunity between the sticks and the 24-year-old has taken it with aplomb.

Domenech was immense in the UEFA Champions League against Lyon on Wednesday morning (AEST), making a few crucial saves in their 1-0 win in France.

“I am lucky enough to have several good goalkeepers and I am happy about that,” Valencia boss Nuno Espírito Santo said.

“My defence was well-organised, solid and we handled the Lyon front line well. My squad is very balanced and we are happy and proud to have won here against a very good team.

“This win is very important. We had to fight until the end. We had a lot of chances in the first half and we defended well…this is a deserved win.”

Ryan is back in training with the club and is edging closer to a return to action. 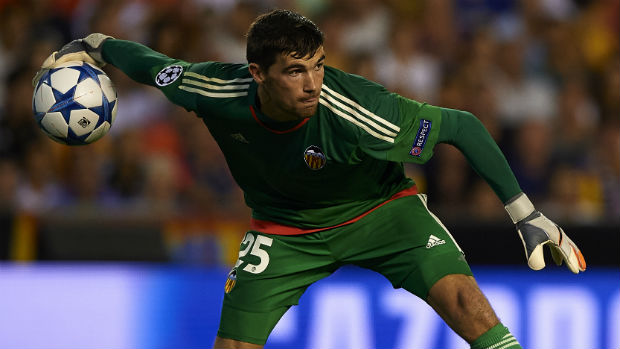 Having missed the Socceroos World Cup qualifiers against Bangladesh and Tajikistan in early September, Ryan has also been left out of next month’s away game in Jordan as he works his way back to full fitness.

He’ll be hoping to convince his club boss he deserves his spot back but it remains unclear if Nuno Santo will continue with the in-form Domenech.

Brazilian shot-stopper Diego Alves is also currently sidelined through injury and is another option in goal for Valencia once back to full fitness.

As for the Socceroos, Bournemouth's Adam Federici has taken his chance and not put a foot wrong in the last two FIFA World Cup qualifiers in place of Ryan, and has been named in the squad for October's crunch match in Jordan.