The Caltex Socceroos took it up a notch at training on Thursday watched on by hundreds of fans at Leichhardt Oval, but defender Bailey Wright took no part in the session.

Wright, one of Australia’s best in the loss to England last week, pulled up sore after Wednesday’s session with coaching staff opting to take no risks with the Preston North End centre back.

He’ll be monitored over the next 24 hours before coach Ange Postecoglou decides whether he’ll be fit to face Greece at ANZ Stadium on Saturday night.

The versatile Mark Milligan, another who was excellent at the back against England, would obviously be a contender to fill the centre-back spots if Wright is unavailable, while Trent Sainsbury, Milos Degenek and Ryan McGowan are other options.

Wright aside, the other 22 players all took part in Thursday’s hour-long session, which was a huge step up in intensity from the previous day.

After being restricted to light duties on Wednesday, Mathew Leckie and Chris Ikonomidis joined in with the rest of the squad and got right down to business. 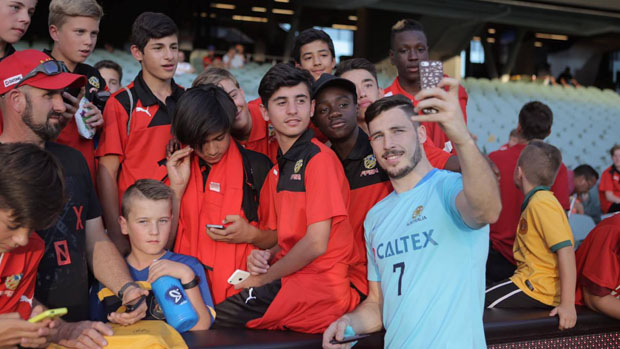 Following the warm-up and stretching, the outfield players broke off into two groups of nine and got straight into a passing drill, playing passes between markers and into space for a teammate, and then following their pass to ensure they were always on the move.

The goalkeepers went off on their own, with the main focus at the start of their session on distribution under pressure.

The next drill saw six attackers trying to work their way through four defenders in a compact area, aiming to break through the lines and then get a shot at a small goal.

The quality got stronger the longer it went on, with new faces Alex Gersbach, Jason Geria and Milos Degenek looking particularly comfortable.

Australia finished the session with a nine v nine match on three quarters of the pitch, with the emphasis on moving the ball quick in tight areas, while trying to get a strike on goal.

It was a drill designed to promote a high-intensity press as well as get the side firing in the front third.

Once completed, it was onto a warm down and quick chat from the boss, before the players went on to meet the fans, signing autographs and posing for countless photos for the healthy contingent in attendance.

Just one more day of preparation to go before facing the Greeks.