Caltex Socceroos: the story of 2016

​In 2016, the Caltex Socceroos eased through second round FIFA World Cup qualification to move into the final phase on the Road to Russia, where the Aussies remain unbeaten after five games in Group B with it all to play for in 2017.

The year ended with the Caltex Socceroos in third, equal on nine points with UAE and a point behind Japan and Saudi Arabia. But, crucially, with three home games to come next year.

The year began in Adelaide with a 7-0 thumping of Tajikistan, and ended in Bangkok with a 2-2 draw against the Thais.

In total, Australia scored 23 times and conceded 10 this year. 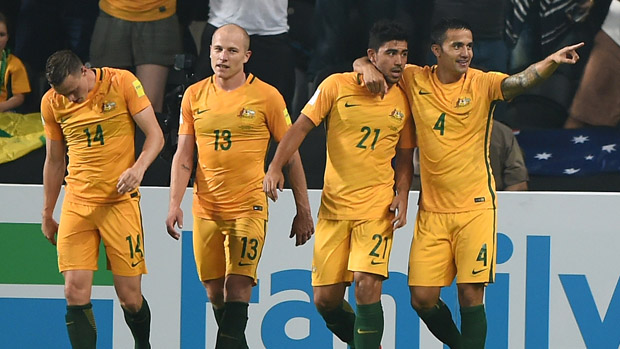 And skipper Mile Jedinak scored all four of his penalties in 2016.

Abu Dhabi provided one of the most fruitful nights of the year in early September.

After a long flight in from Perth via Dubai after defeating Iraq to open Group B, facing UAE would never be easy.

The Emiratis’ shock victory in Japan suddenly made this a group blockbuster.

But in the cloying heat, the Australians put in a titanic effort with - who else – Tim Cahill guiding home the only goal of the night after coming off the bench. 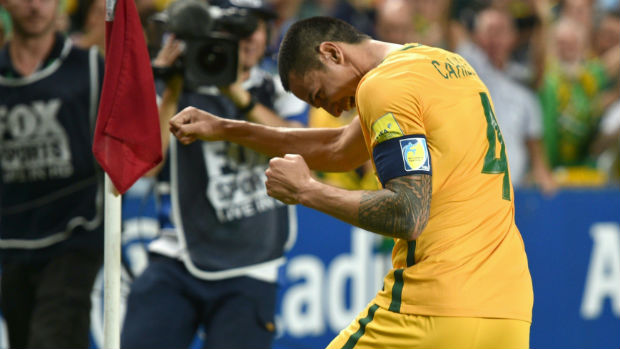 From a player perspective, the ascension of Milos Degenek, Alex Gersbach, Apo Giannou and Jamie Maclaren augers well for the future - all made their national team debuts in 2016.

And the continuing development of Tom Rogic and Aaron Mooy gives Australia cause for optimism in the attacking third, while Mark Milligan confirmed his crucial importance to the team.

The year started with a flood of goals in the Caltex Socceroos’ first match in Adelaide in more than five years. The hosts had too much class for Tajikistan, effectively wrapping up the points with two goals in the first 12 minutes. 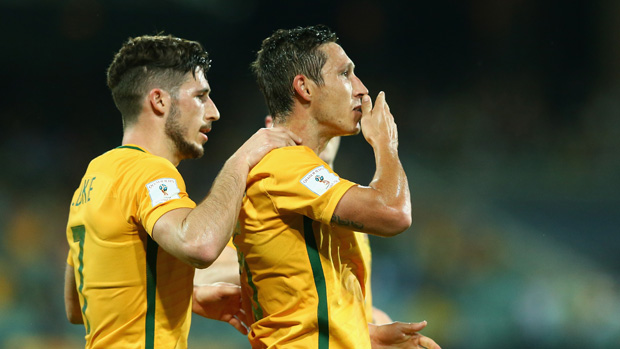 It was a procession after the break as Australia scored five more times – and hit the woodwork another four times – with substitute Tom Rogic bagging a brace.

Top spot in the group was on the line against Jordan, who had wily Englishman Harry Redknapp in charge. But any potential nerves were blown out of the water in the first half as Ange Postecoglou’s troops raced to a 3-0 lead, with Robbie Kruse providing assists for each goal. 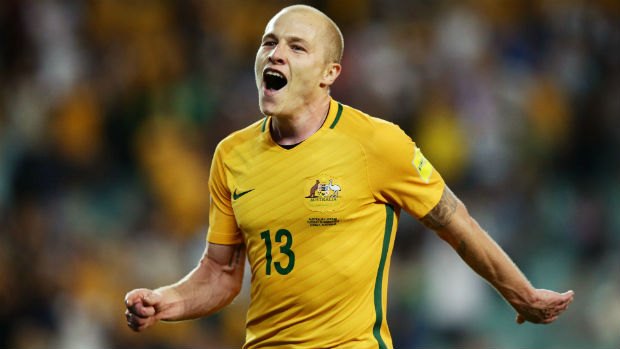 There was no respite for the visitors after the break as the green and gold added two more goals to emphatically book their spot in the next stage of World Cup qualifying.

Sunderland was the venue for a huge clash with Roy Hodgson’s England, who were deep in preparations for the European Championships. Despite taking the game to the hosts, goals to Manchester United duo Marcus Rashford and Wayne Rooney gave the Three Lions a 2-0 lead early in the second half. 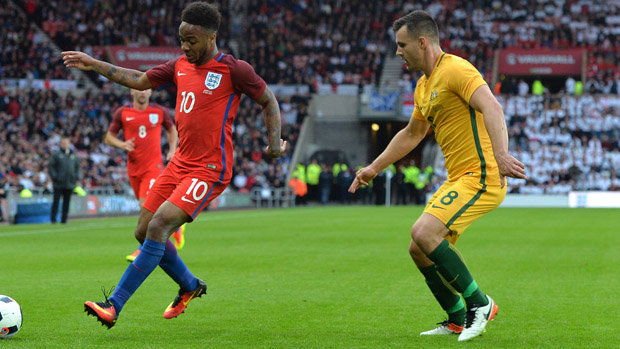 Substitute Milos Degenek – on his international debut – helped Australia pull one back as his cross was turned into his own net by Eric Dier. While it was a defeat, it was some performance by the Aussies.

A week later and almost 40,000 fans were on hand in Sydney as Greece arrived Down under for the first time in a decade. On a poor surface it appeared like the match would end goalless until a dramatic late winner. 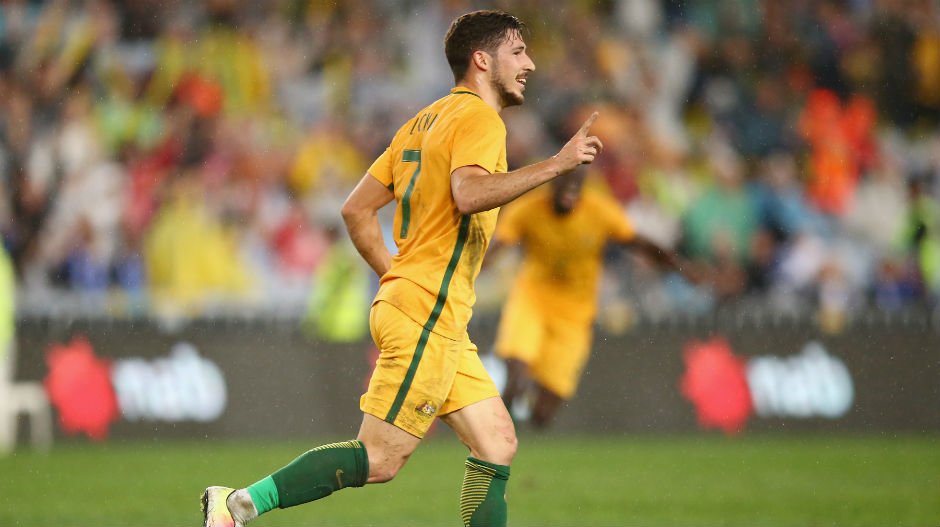 Leckie cut inside from the left and blasted a powerful shot into the bottom corner to snatch victory on a night when young fullbacks Jason Geria and Alex Gersbach got their first international caps.

The two sides met again in Melbourne three days later but this time it was the visitors who would get the win. And they did it thanks to a howitzer of a goal from Iaonnis Maniatis, who lobbed goalkeeper Adam Federici from more than 60-metres out. 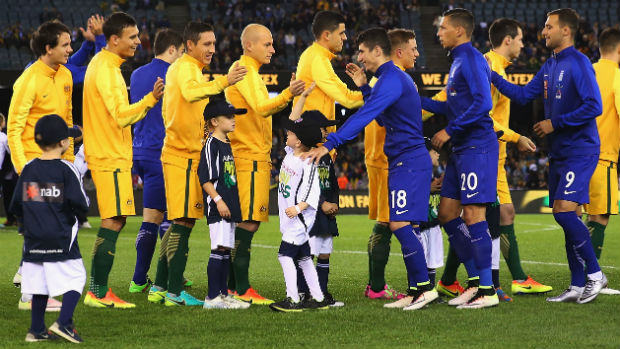 While Trent Sainsbury pulled a goal back with a header from close range on the hour mark, there would be no fight back from the home side.

The final phase of qualifying kicked off on a pristine surface in Perth with a stubborn Iraq standing in the way of Australia and a flying start to the group stage. 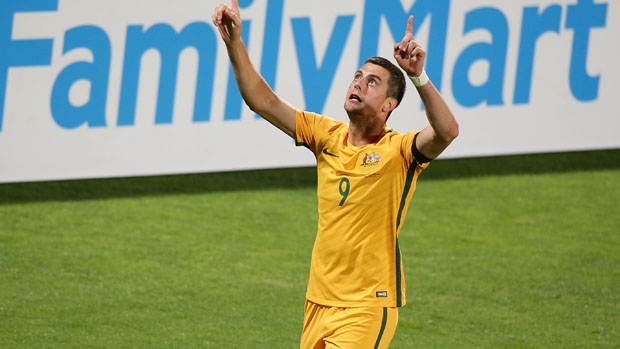 It took almost an hour for the Caltex Socceroos to break Iraq’s resolve, with two goals in the space of six minutes from Luongo and Juric enough to secure the three points. The perfect start in front of almost 19,000 fans.

It was then onto a different challenge in the heat of Abu Dhabi against the emerging UAE, who had beaten Japan in Saitama just a few days earlier. But Australia’s high-energy game proved too much for the hosts in the 30-degree heat. 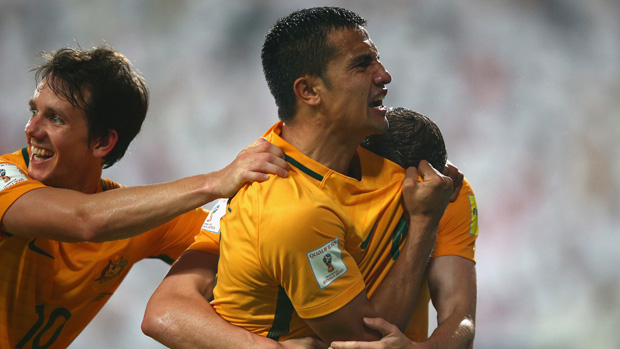 Cahill came off the bench with 20 minutes left and, with almost his first touch, got on the end of Brad Smith’s pin-point cross to volley home with his right foot and break Emirati hearts. Two from two and onto Jeddah.

Roared on by more than 60,000 fans, the Saudis made an ideal start taking the lead inside five minutes through Taiseer Al Jassam. But Australia slowly turned the tide and hit back on the stroke of half-time via a glancing header from Sainsbury. 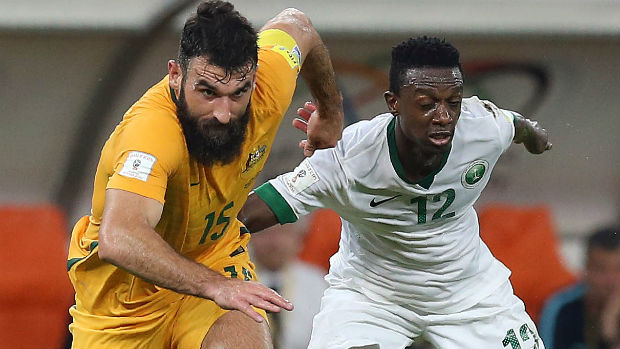 And when Juric guided home Kruse’s cross with 20 minutes left it looked like it would be enough but substitute Nassir Al Shamrani salvaged a point for the home side with 10 minutes left.

Another enthralling chapter in the rivalry with AFC nemesis Japan ensued a few days later in Melbourne. And just like in Jeddah, another slow start hurt the Caltex Socceroos as Japan scored inside five minutes from Genki Haraguchi. 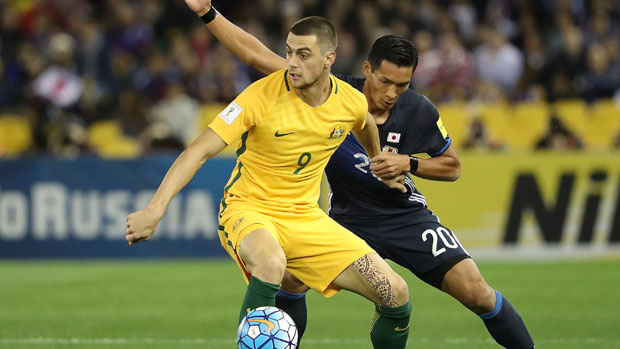 Whatever Postecoglou said at the break worked a treat as Australia lifted the tempo in the second half, equalising from the penalty spot after Juric was bundled over in the box. The hosts had chances to win it late but also had keeper Mat Ryan to thank for a superb reflex save to keep scores level.

The Caltex Socceroos last match in 2015 was in Bangkok and a motivated Thailand side playing for national pride after the passing of their King a month earlier. Australia dominated from the first whistle and took a deserved lead when Jedinak converted from the penalty spot. But in a see-sawing game, the War Elephants got back into contest with two goals either side of half-time from Teerasil Dangda saw them dreaming of a huge upset. 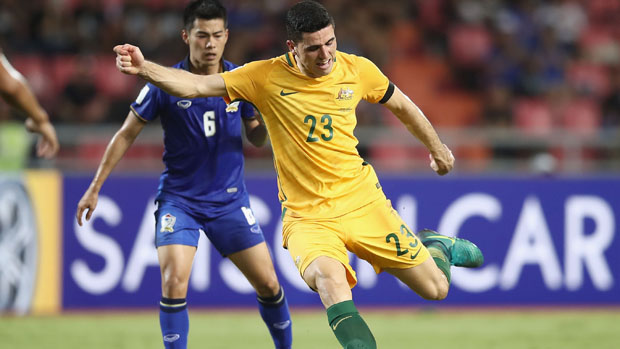 But a third penalty in the match – again converted by the Aussie skipper – got the Australians back in the contest at 2-2. It was a third straight draw for Postecoglou’s men, who sit third in Group B at the halfway stage of qualifying.