Defender Ryan McGowan has declared the Caltex Socceroos won’t be intimidated by the hostile 65,000 crowd and a fired-up opponent in Friday morning’s (AEDT) FIFA World Cup qualifier in Saudi Arabia.

A sell-out crowd of around 65,000 is expected at the King Abdullah Stadium in Jeddah for the clash between the top two sides in the group.

“If you look at where most of the boys play, we are playing in front of big crowds and intimidating crowds every single week,” McGowan told FFA TV.

“We enjoy that, we embrace it and it’s better for us to play in stadiums that are packed and hostile than playing in front of no one.

“We enjoy that situation and again hopefully it will be a big crowd on Thursday night and we can get a good result and then it will be an even bigger crowd back in Melbourne against Japan.”

McGowan is expected to start at right back against Saudi Arabia after Milos Degenek was ruled out of the squad last week through injury. 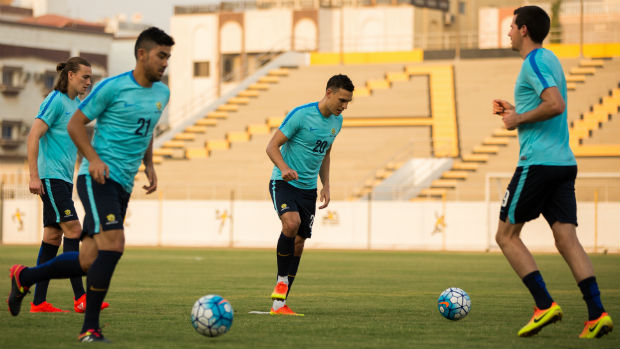 Caltex Socceroos get to work in Jeddah

And the 27-year-old, who plays for Henan Jianye in the Chinese Super League, has been a lucky charm for the Caltex Socceroos recently.

Of the four stars McGowan has made in the last 12 months, the side has yet to concede a goal with him on the pitch.

“Our main objective is to get to Russia so if that’s me playing four games in three years or playing every single game, it’s up to me when I get that chance to make sure I don’t put a foot wrong and keep a clean sheet as a defender and we progress from there.

“The fullback position is one that has been chopped and changed a little and as one of the players in those positions you want to be doing well and making sure it’s more difficult for him to take you out of the team than to put you in,” McGowan added.