Alex Gersbach receives a lot of messages on his phone, especially since he moved from Sydney FC to Norwegian powerhouse Rosenborg. But there's one What's App message he'll never forget, as he explains.

“I got a What’s App message from Joel Freeme [Socceroos team manager]," he told FFA TV.

"He said ‘Gerbs, Ange has selected you in the Socceroos squad and we need an email [address] to send to your club."

He says it was a surreal experience when he was notified of his selection early in the morning in Norway a couple of weeks ago.

“That’s how it came about. It was an amazing feeling. I think I had just woken up…it was crazy," Gersbach recalls, still a little dazed by what's happened.

While Gersbach has been earmarked as a future Socceroo ever since bursting onto the scene with Sydney FC last season, even he didn’t expect it to happen this quickly.

He made his Hyundai A-League debut at 17 and is already playing at a big Scandinavian club, but Gersbach says there will be nothing better than pulling on a Caltex Socceroos jersey on Thursday night. 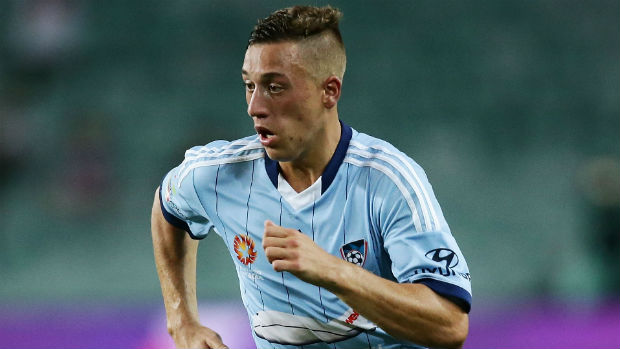 The Rosenborg left-back is one of three uncapped players in Ange Postecoglou’s squad hoping to make their international debuts in the FIFA 2018 World Cup qualifier against Tajikistan at Adelaide Oval.

Gersbach is the youngest member of the squad at just 18, but looks ready for international football, admitting it would be a dream come true to get a shot this week.

“It would be amazing. As an Australian footballer that’s all you ever want is to play for the Socceroos."

Gersbach is likely to fight it out with Liverpool’s Brad Smith for the starting spot at left-back against Tajikistan, and also next week’s final qualifier against Jordan in Sydney.

“To make my debut at Adelaide Oval would be amazing.  If it doesn’t happen, I’ll keep working hard and make sure it does happen [in the future]," he added.