Caltex Socceroo Robbie Kruse says Saturday night’s record crowd proves there’s a “big aura” around the Hyundai A-League now, with the quality on the pitch at an all-time high.

While the Caltex Socceroos were in transit to Melbourne ahead of Tuesday night’s FIFA World Cup qualifier against Japan, almost 62,000 fans turned out to watch an epic Sydney Derby at ANZ Stadium.

On a memorable night for the Sky Blue half of Sydney, a second-half blitzkrieg handed Graham Arnold’s side a 4-0 win over the Wanderers and Harbour City bragging rights.

It was a monumental occasion for the competition and one that wasn’t lost on Kruse, who started his career in the Hyundai A-League in 2009 and played four seasons at Brisbane Roar and Melbourne Victory.

“Quality-wise the league has grown massively. I left five years ago and the quality of players here now is really good,” Kruse said on Sunday.

“There’s a big aura around the league with Timmy [Cahill] coming back as well, it’s massive. It’s exciting times and hopefully it can keep progressing.

“The spectacle of the games has been good as well. I saw the comeback from the [Central Coast] Mariners…it’s exciting stuff and hopefully people now will jump on board even more.” 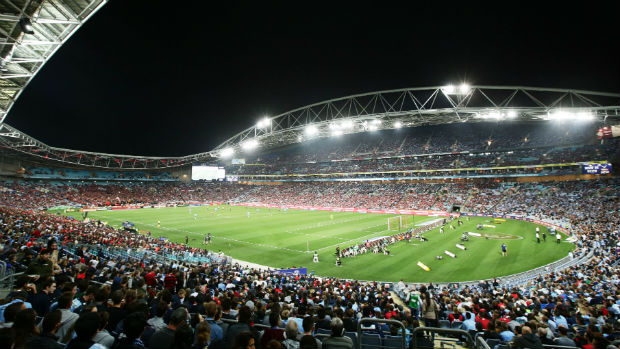 It was a similar sentiment for his Caltex Socceroos teammate Tomi Juric.

While the former Western Sydney Wanderers found the result hard to take, he was blown away by the spectacle and the hype around the game.

“I remember when the A-League started and I used to go to a few Sydney FC games,” Juric said.

“It’s come a long way and we should be very proud of that. Hopefully we can continue to go in this direction and keep putting football in the right spot in this country.

“It’s the biggest derby in Australia and it deserved the 60,000-odd that were there. It’s a big credit to Sydney FC and the Wanderers for putting on such a spectacular event.”

A massive crowd is also expected on Tuesday night as the Caltex Socceroos host Japan in a pivotal FIFA World Cup qualifier.

Then capping off an incredible week, Cahill is likely to make his Hyundai A-League debut for City in the Melbourne Derby against Victory on Saturday night.