New Caltex Socceroo Jason Geria says he is buzzing to be among Ange Postecgolou’s squad and can sense an opportunity to make the right-back position his own for the future.

You haven’t been able to wipe the smile from the face of the athletic Melbourne Victory defender since he arrived at Camp Socceroo in Adelaide on Sunday.

The 22-year-old appears locked in a battle with Perth’s one-cap Socceroo Josh Risdon for the right-back position and it’s something he believes he can make his own if given the chance.

“It’s massive. The boss has shown he’s willing to give opportunities to players that are performing at their clubs,” Geria told FFA TV.

“I’m fortunate to get mine this camp and I’m going to do all I can to get some game time and nail that spot down.

“It would mean the world [to make my debut],” he added.

“It’s something I’ve wanted to do since I was very young. It’s what every footballer strives to do, play for their country…it’s such a big achievement.

“I’ll be over the moon if I’m able to pull on the green and gold.” 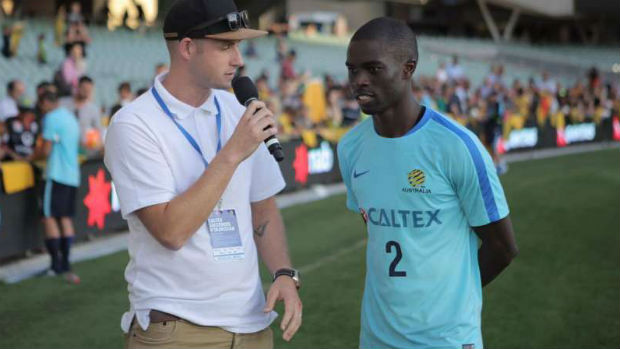 Geria has deserved his call-up, in consistent form in the Hyundai A-League while being a strong contributor in Australian youth sides over the last few years.

He said while disappointed not to have qualified for the Rio Olympics with the Olyroos recently, the whole experience had made him a better player.

“I gained a lot playing against different teams that play different styles of football,” the Canberra-born right-back of Ugandan heritage said.

“Having to adapt to that and try and break that down. You learn a lot from that. It’s disappointing we didn’t get through to Rio but I think the boys took a lot from that.

“As you can see some of them have gone on to excel. It’s a stepping stone. You do have to go through some downs to further your career.

"It’s something I took on and tried to improve since then.”