Nathan Burns says there is no limit to what the Socceroos can achieve and insists making an impact at the 2018 FIFA World Cup in Russia should be the ultimate goal.

Burns admitted the result was satisfying but suggested there is room for improvement heading into Tuesday’s clash with FYR Macedonia in Skopje.

“We had nothing to lose. We went in there pretty excited about the match and it was a great result in the end,” Burns told Fox Sports.

“If we keep doing what we’re doing who knows what the limit is for the Socceroos.

“We can keep getting better and better and our plan is for the next World Cup to be up there with the top teams, hopefully get out of the group and really push for the finals.”

Ange Postecoglou handed Burns a rare start against Die Mannschaft and the Phoenix front-man repaid his faith with the vital assist for Australia’s opening goal.

The 26-year-old showed glimpses of his best against Joachim Low’s side and praised the tactical nous which Postecoglou has instilled within the national team.

“I think what helps us most is that we’ve got a good structure. Because the structure is in place you can bring certain players in and they’re going to do the same job,” he said.

“I think that’s what Ange has done really well with this team, we have a style of play and when you come in (to the team) you’ve got to play how the players were playing previously.” 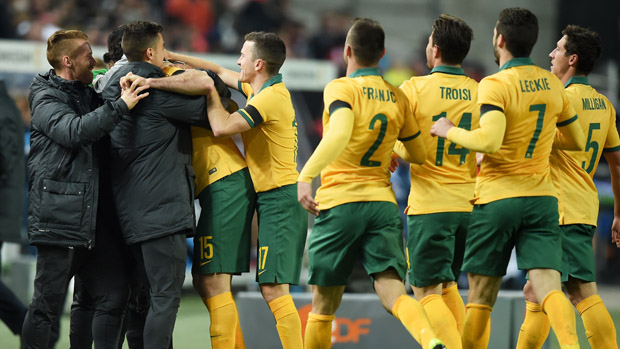 Burns has enjoyed a career-best season with Wellington Phoenix netting 13 goals to help Ernie Merrick’s side to sit four points clear at the top of the league.

The Blayney-born striker admitted he was pleased with his own performances but insists his focus is on delivering the Phoenix’s first Hyundai A-League crown.

“It’s been a great year and if the season finished today I’d be very happy,” he said.

“But obviously we’ve still got the A-League title to win and we’re so close. Why can’t we win it? Being a Wellington team…a good run into finals, so to cap it off would be fantastic.”