Speaking after Tuesday night’s World Cup qualifier in Bangkok, the FC Tokyo striker, who made a positive impact for Australia after coming off the bench in the second half, was full of praise for the War Elephants.

“It was a tough game but full credit to Thailand they actually came out and played,” he told Fox Sports.

“They played with their hearts on the line and you wouldn’t expect them to be bottom of the group.”

Australia started commandingly taking the lead on seven minutes but the Thais worked their way back into the game to take a 2-1 lead by the 57th minute.

A Mile Jedinak penalty, his second of the night just after the hour mark, spared their blushes.

“I actually thought they were going to run away with it,” said Burns, who had a searing drive hit the top of the bar shortly after coming on in the second half.

Keeper Mat Ryan came to the rescue of Australia with just minutes left, blocking a near certain goal in a one-on-one as the Thais finished the stronger of the two. 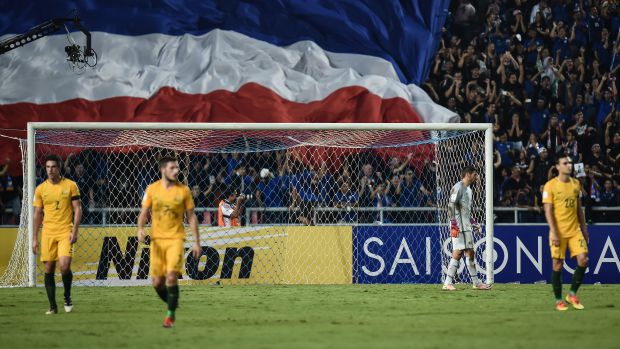 This was Australia’s third draw in a row after sharing the spoils with Saudi Arabia and Japan in their previous two qualifiers.

“The boys did work hard but maybe some final pieces we didn’t string together.

“But we need to go back and work on that. The last couple of games we probably haven’t been up to scratch.

“We’ve got a long four months off now. Where Ange and everyone can think about it and then come back for the next stage [of qualification].”

Australia is now on nine points, a point behind leaders Japan and Saudi Arabia in Group B. Three of their final five qualifiers are on home soil, starting in March next year.