The surface in Brisbane has come under some criticism ahead of the clash, with both China coach Alain Perrin and Socceroos winger Robbie Kruse voicing their disappointment in the last 24 hours about the pitch.

But Leckie brushed off any fears it could affect the Socceroos’ game when they battle it out for top spot against Korea on Saturday night.

“On TV I’ve seen it and it looks pretty good,” the Socceroos flyer told reporters on Thursday.

“The ball moves well, obviously there’s patches of the pitch but for me it’s not a problem.

“We’re still going to go out there and play our game. I haven’t really seen the pitch…we’ve all played on bad pitches in our time. I saw it on TV and it didn’t look too bad.”

Leckie admitted he was suffering from some back soreness after two whole-hearted performances against Kuwait and Oman, but it was nothing serious to keep him from taking on the Koreans. 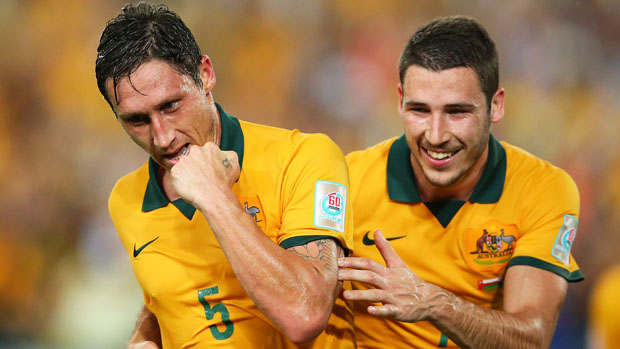 But given it will be their third match in just eight days, the speedy winger expects coach Ange Postecoglou to make a few more changes to ensure everyone’s in peak condition heading into the quarter-finals.

“That’s why we have 23 players and there’s a lot of depth in our squad,” Leckie said.

“Throughout the tournament there’s always going to be problems with players, not major injuries maybe just pulling up tight.

“That’s why we have 23 players and in this tournament the players we have and the ones that came in the other day did really well.

“We’ve all got confidence in all our players to come on and do a job. The guys that started the second game really showed that.”

Conditions are expected to get as high as 35 degrees for Saturday night’s match, which will test just how fit and fresh both sides but Leckie expects it to favour the ultra-fit Aussies.

“We did our pre-training camp in Melbourne and it was hot conditions there as well,” he said.

“We didn’t take it easy we were working really hard and putting ourselves under tough conditions.

“I think we’ll be fine. We’re known as a team that fights and does a lot of running in the games. In conditioning standard we’re quite good."

The Socceroos have been supremely impressive in their first two group games.

However, Korea have yet to hit their straps battling to two scratchy 1-0 wins over Oman then Kuwait.

But Leckie expects them to lift for a clash with Australia and with the lure of top spot in the group on the line.

“Teams go about their game plan differently against other opposition. They are going to go to go into the game against us a little bit different,” he said of the South Koreans.

“They are a team with players with a lot of individual quality so we know we have to be careful with that.

“We’re confident with the way we’re playing, it’s worked well so far with the teams we’ve played and we’re going to continue to try and move the ball quickly and open up teams.

"And if we can continue that and play at the tempo we’ve been playing, we’ll definitely get that opportunity.”

Tickets to the Socceroos' remaining Group A match are still available.  Click here to get yours today.