If Brad Inman makes his Caltex Socceroos debut against England it will round out a journey that started 10 years ago just over 20 kilometres way from Sunderland's Stadium of Light.

Inman moved from Adelaide to Sunderland's archrivals Newcastle United as a 14-year-old but after a promising start at the Premier League club's academy, the Australian midfielder was forced to take the road less travelled to wear the green and gold.

Known as 'Kaka' during his time on Tyneside - due to physical similarities as well as his playing style - stories predicting Inman's imminent Premier League breakthrough popped up regularly in the Australian media in 2009.

Inevitably the 'Next Harry Kewell' tag was thrown in his direction.

But Inman's expected explosion onto the world stage never came. 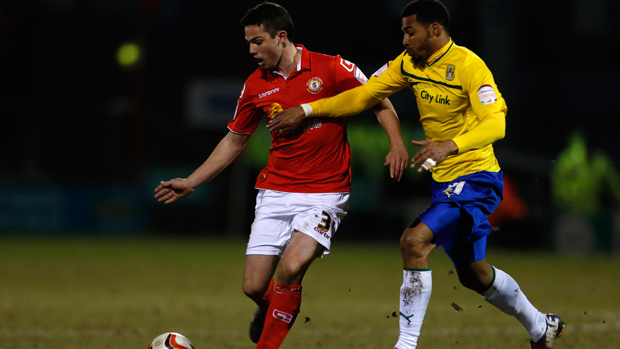 Inman was named in Newcastle's match-day squad on two occasions but failed to make a senior appearance for the club.

Meanwhile, his involvement with Scotland's Under 19 and Under 21 national teams had some believing he would be lost to the Socceroos.

In November 2012, Inman moved to Crewe Alexandra in League One for much-needed games and made 26 appearances in all competitions, scoring eight goals.

Newcastle released the Australian at the end of that season but Crewe moved quickly to sign Inman, who has gone on to make 117 league appearances for the Railwaymen.

While Crewe finished bottom of League One in 2015-16, earning relegation to England's fourth tier, Inman has had the best season of his career.

The 24-year-old has played 42 games in all competitions and notched 10 goals, including six in as many matches in January and February.

Inman's goal tally made him Crewe's leading scorer in the league this term, and the club have announced they have offered the Australian a new contract for next season.

In February, Inman told the Stoke Sentinel: "This is the best goal-scoring run of my career, and I'm playing well and with a smile on my face."

It also had Inman thinking about the Socceroos.

The South Australian's versatility will suit Ange Postecoglou, with Inman having lined up on both flanks this season, as well as up front and in behind the striker.

If Postecoglou points in his direction on May 27 it will be a symbolic moment for Inman - a senior international debut just across the River Tyne from where he began his professional football career.