Australia land in Chile for FIFA U-17 World Cup

The Joeys have landed in Chile and will begin their FIFA U-17 World Cup preparation this afternoon [Thursday morning AEDT].

Australia’s U-17 side will base themselves out of Rancagua – about two hours south of Chile’s capital Santiago – with a one-week training camp ahead of their opening group game against Germany on Sunday, 18 October.

Joeys head coach Tony Vidmar said he was looking forward to kicking off the final chapter of an odyssey that they first began preparing for in August 2013 with the AFF Championship in Mynamar.

“It’s been a long time since we first qualified at the AFC U-16 Championships in Bangkok, but we’re finally here,” Vidmar said.

“This is a FIFA World Cup; this is as good as it gets.

“A lot of these players have been working towards this goal since they were 13 and 14-years-old.

“We are absolutely raring to go and can not wait to pit ourselves against the best in the world.” 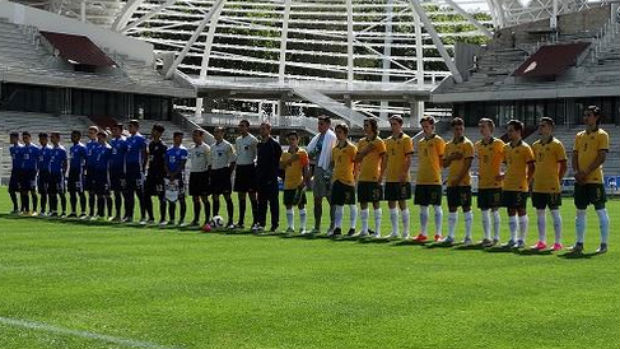 A friendly has been scheduled with Costa Rica on Sunday 11 October, after which the Joeys will move on to Chillan where they will play all three of their FIFA U-17 World Cup group stage games.

FFA Centre of Excellence technical director Peter de Roo said the aim of the next five days in Rancagua was to acclimatise to the country and fine-tune the Australian brand of football.

“There are five days to do that in Rancagua, and we really want to put an emphasis on making sure we’re playing the Australian way,” de Roo said.

“We want to make an impact at this FIFA U-17 World Cup with a positive brand of football.”

The Joeys begin their FIFA U-17 World Cup campaign against Germany on Sunday 18 October, before taking on Mexico on Wednesday 21 October, and then wrapping up the group stage on Saturday 24 October against Argentina.