It was a mixed bag for our overseas contingent in weekend action, with goals, cleansheets, a red card and Cup final among the performances from our Aussies abroad.

Ryan McGowan played the full game and picked up a booking as his 10-man Dundee United lost 2-0 to Celtic in the Scottish League Cup final at Hampden Park.

Goalkeeper Mark Schwarzer kept a cleansheet for Leicester City as they played out a goalless draw with Hull City in the Premier League. The former Socceroo made a string of fine saves to deny the visitors at King Power Stadium as the Foxes bid to stave off relegation. 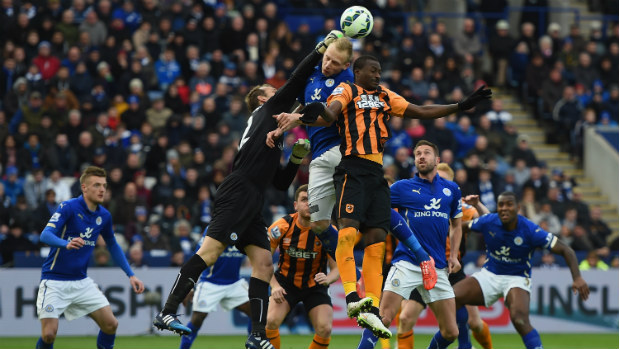 Crystal Palace skipper Mile Jedinak was serving the second match of his suspension as Alan Pardew's side claimed a thoroughly deserved 3-1 win over QPR. The three points sees Palace move to 12th and they're now eight points clear of the drop-zone.

Chris Herd was missing from Aston Villa's squad that continued their resurgence under Tim Sherwood due to an ongoing Achilles injury, while Jason Davidson was not selected for the Baggies team that beat Stoke.

Adam Federici was rested from Reading's squad ahead of Tuesday's clutch FA Cup tie at the Madejski Stadium, with his team going down 4-1 away to Watford in the Championship.

James Meredith continued his recent good form as Bradford City played out a 1-1 draw with Notts County. The Bantams will also have just a two day break ahead of the FA Cup replay against the Royals, with a glamour semi-final clash against Arsenal at Wembley awaiting the victors.

Midfield dynamo Massimo Luongo played until the 79th minute in Swindon Town's 1-0 away win over Port Vale in League One. The three points sees the Robins consolidate third place on the table as they chase promotion to the Championship.

Bailey Wright played the full game while Neil Kilkenny came on and supplied an assist in Preston North End's thumping 5-1 win at home to Crewe.

It was a mixed day for Scott McDonald as he made another appearance in his second spell at Motherwell in the Scottish Premier League, the striker again finding the back of the net but his team went down to Aberdeen.

In the Belgian Pro League, James Troisi was taken off at half-time in Zulte Waregem's 4-1 loss at home to KV Oostende, while Mat Ryan's Club Brugge won 3-1 away to Westerlo.

Mathew Leckie played the full game but couldn't prevent Ingolstadt from going down 3-1 at home to Karlsruher SC in the 2. Bundesliga.

Dario Vidosic was an unused substitute for FC Sion, who beat Zurich 1-0 away from home.

Ivan Franjic stayed on the bench for Torpedo Moscow in a 1-1 Russian Premier League draw at home to Zenit St Petersburg, a match marred by alleged racist abuse directed at the visitors' Brazilian goal-scorer Hulk by sections of the home fans.

Mitch Langerak was relegated to understudy duties for Borussia Dortmund as they claimed a point at home against FC Köln in the Bundesliga. The goalkeeper's side are now tenth in the league with Langerak likely to get his next chance in Dormund's upcoming Cup tie against Hoffenheim.

Fellow custodian Mat Ryan was in goals for Club Brugge in mid-week Europa League action. The Belgian outfit conceded first but clinched a 2-1 home win over Besiktas in the first-leg of their round of 16 match-up.

Tommy Oar was forced to sit out FC Utrecht's 3-1 loss on the road in the Eredivisie, while compatriot Michael Zullo continues to be sidelined by a torn ACL.

Defender Trent Sainsbury played the duration of PEC Zwolle's 2-0 loss in the Dutch top-flight, with teammate Eli Babalj forced to warm the bench from the sideline.

It was an unhappy night for recently selected Socceroo teenager Chris Ikonomidis, who was shown a red card after just 12 minutes for Lazio's youth side – however his team still managed to claim a 1-0 win on the road.

Tim Cahill played all but the final minutes as his new club Shanghai Shenhua maintained top spot in the Chinese Super League. The striker continued to develop his new partnership with Brazilian Paulo Henrique, who was on the scoresheet in their 1-0 away win over Guangzhou R&F.

Also in China's top flight, Josh Mitchell played the full game and helped Liaoning to beat Shandong Luneng 3-2 at home. Meanwhile Adrian Leijer's Chongqing Lifan outfit are without a point from two matches after being beaten 2-1 in front of their home fans.

In the J-League, Mitch Duke came on for the last 18 minutes of Shimizu S-Pulse's 0-0 draw at Albirex Niigata.

Matt Smith was in Bangkok Glass' line-up as they won 3-2 in their re-scheduled opening round clash against Sisaket FC in Thailand.

Aleksandar Jovanovic completed 90 minutes and helped Jeju United to keep a clean sheet and earn a point in a 0-0 draw at home to Busan.

Andy Rose came on in the 67th minute and set up a goal for Obafemi Martins, but couldn't prevent his Seattle Sounders team from losing 3-2 at home to San Jose Earthquakes in Major League Soccer.