Tom Rogic has tuned up for the Socceroos; upcoming World Cup qualifiers by scoring a sensational winner off the bench in Celtic’s League Cup Quarter-final win on Thursday morning (AEDT).

The Canberra-born playmaker came off the bench for the Hoops after an hour and scored the decisive second goal eight minutes from time of their 2-1 win over Hearts.

And it was a peach of a finish from the 22-year-old Socceroo.

Leigh Griffiths made a barnstorming run down the right before crossing with Rogic getting to the near post and producing an audacious flick to score.

It’s just the type of form Socceroos boss Ange Postecoglou will want to see ahead of next month’s qualifiers, starting against Kyrgyzstan in Rogic’s hometown of Canberra on November 12.

While Rogic had a great win, it wasn’t as good news for Mile Jedinak in the Capital One Cup in England.

The Socceroo skipper made his return for Crystal Palace who were beaten 5-1 at Manchester City in the last 16.

Goalkeeper Adam Federici’s Bournemouth were also knocked out as Liverpool got their first win of the Jurgen Klopp era with a 1-0 triumph at Anfield.

Awer Mabil played 68 minutes as his FC Midtjylland beat FC Roskilde 3-2 after extra-time in the Danish Cup, while Ben Halloran’s FC Heidenheim won on penalties in the German Cup, with the winger substituted after 105 minutes of play. 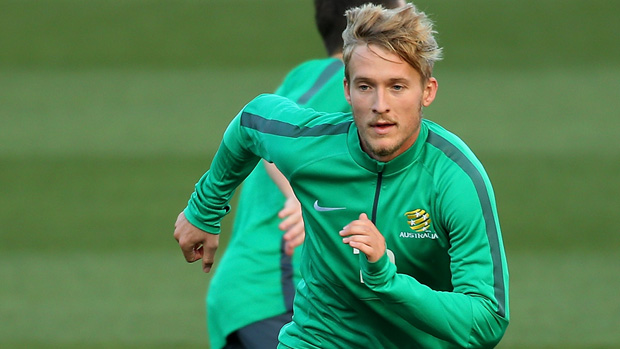 Tomi Juric and Daniel De Silva were involved also involved in a shoot-out in the Dutch Cup with their Roda JC Kerkrade side winning 6-5 on penalties against FC Lienden.

Juric played the full 120 minutes and converted his spot-kick while De Silva came on as a late substitute.

Defender Aziz Behich watched from the bench as his Bursaspor won 1-0 against Sivasspor in the Turkish Super League.