Like fellow Caltex Socceroo Mitch Langerak in Germany, keeper Brad Jones is on track to help his club win silverware with Feyenoord in pole position to win their first Dutch Eredivisie title in almost two decades.

They have a five-point gap at the top with 10 games to go. It would be Feyenoord’s first Eredivisie title since the 1998/99 season.

Dutch powerhouses Ajax are the only genuine chance of overtaking Giovanni van Bronckhorst’s side in the race to the championship.

The pair clash in a title-defining encounter in Amsterdam on April 2, with the result of that likely to have huge ramifications on the destination of Dutch league silverware.

PSV Eindhoven – who Feyenoord beat 2-1 over the weekend - are in third spot but appear out of the reckoning a whopping 11 points off the top.

Feyenoord have been a standout performer all season and are currently enjoying a 10-game Eredvisie winning streak.

And Jones has been an integral part of their success so far this campaign. 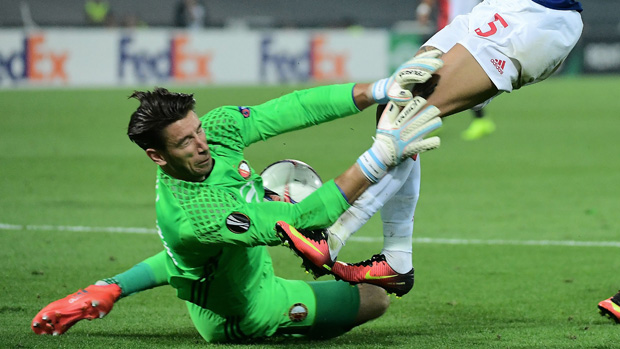 The Aussie shot-stopper has played in 23 of their 24 league games, keeping a remarkable 14 clean sheets in that span.

While he’s now 34, Jones is arguably in career-best form and potentially in line for a return to the Caltex Socceroo squad for March’s World Cup qualifiers.

Before then though the ex-Liverpool and Middlesbrough gloveman is focused on continuing Feyenoord’s march to a drought-breaking championship.

The next step is a Rotterdam Derby away at Sparta this weekend, who have Aussie duo Craig Goodwin and Kenneth Dougall in their squad.