Former Socceroo stars and Asian Cup ambassadors Brett Emerton and John Aloisi were on hand at the unveiling of the AFC Asian Cup trophy at Bondi Beach on Tuesday.

It’s the trophy the Socceroos desperately want, and hope to win on home soil at the third attempt.

The AFC Asian Cup is the oldest, biggest and most prestigious football event in Asia, and the trophy is one of the most coveted in world sport.

With the tournament commencing on January 9 in Melbourne and featuring 32 games of football in 23 days across the five host cities, excitement and expectation is building fast.

The AFC Asian Cup Trophy Tour will give football fans a once-in-a-lifetime opportunity to see and be photographed with the trophy and to participate in free, fun interactive football activities suitable for all ages.

The Trophy Tour events will be staged between 10am and 12pm on: 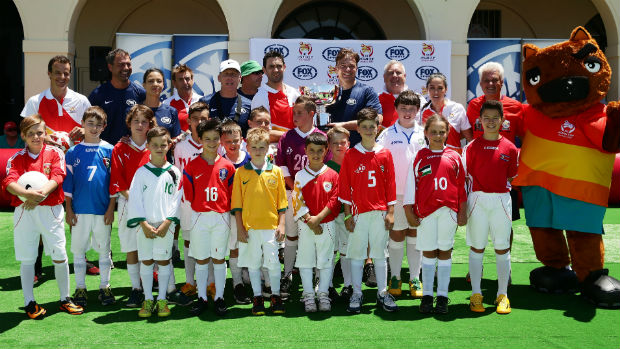 “We came so close last time, losing the final 1-0 in extra time to Japan. This time the Socceroos will be desperate to set things right and lift the trophy in our own back yard,” said Emerton.

“Traditionally, the Socceroos have a great rivalry with so many of the AFC Asian Cup countries, such as Japan and Iran, and AFC Asian Cup Australia 2015 is the chance to win the trophy in front of our home fans.

“Such is the importance of the Trophy to the Socceroos, the players refuse to touch the trophy until it has been won,” he added.

The Australian section is the final leg of the Trophy Tour which commenced in China in September and has since travelled to Qatar, United Arab Emirates, Korea Republic and Japan before arriving in Sydney tomorrow morning.

The Trophy Tour in each host city will involve colourful, interactive events which will be suitable for men and women, boys and girls of all ages.

Fans will be also able to take photos with the AFC Asian Cup Trophy, and meet and be photographed with past and present Socceroo greats.