Ange's admiration for J-League and respect for Japan

He’ll be doing his best to put a dent into their FIFA World Cup hopes tonight but Caltex Socceroos boss Ange Postecoglou has also revealed his huge regard for Japanese football.

Ahead of the two nation’s FIFA World Cup qualifier in Melbourne, Postecoglou said he expects another titanic tussle between Australia and Japan.

While there is plenty of history between the two AFC rivals, the Caltex Socceroo boss says he has plenty of admiration for the Japanese game.

“My view is the J-League is the strongest league in the region, I admire the way the league is run,” Postecgolou said.

“They are the number one country in youth development as well and it’s probably only at national team level we can justifiably challenge them at the moment.

“But our A-League is growing and our benchmark is to make it as strong a competition as the J-League is. 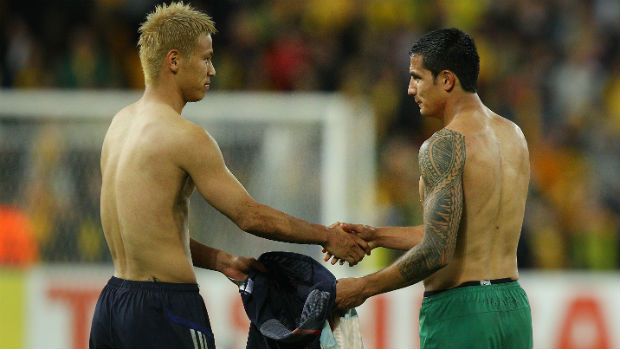 “For us there’s respect there and we recognise the strength of Japanese football and its growth. But we also know at national team level we compete very well.

“There’s a mutual respect there between the two nations and when I look at the players that will be on the pitch on Tuesday night I think you’ll see a high quality game and a game that’s going to excite the supporters.”

Who’ll start for the Caltex Socceroos against Japan?

Ange: still early in the group for Caltex Socceroos

In all, there has been 23 meetings between the two nations, with Australia winning seven, Japan eight and the other eight have been drawn.

The Caltex Socceroos currently lead the standings in Group B after three matches, level on seven points with Saudi Arabia.

Japan and UAE are a point further back. The Saudis and UAE also meet on Tuesday night, in Jeddah.