Caltex Socceroos coach Ange Postecoglou was left shattered after an eye-catching display against Chile wasn’t quite enough to see the Australians progress overnight at the Confederations Cup.

In Tim Cahill’s 100th appearance, the Caltex Socceroos outclassed world number four Chile only to draw 1-1 in an entertaining final group B game in Russia.

The result wasn’t enough for the Socceroos to progress through to the semis and their campaign ended in Moscow with the draw.

“Shattered is a good word,” he told SBS TV.

“Hugely disappointed. Just for the players who’ve put in an enormous effort against a world-class team.

“We’ve been working towards this day. That’s the kind of team we want to be. 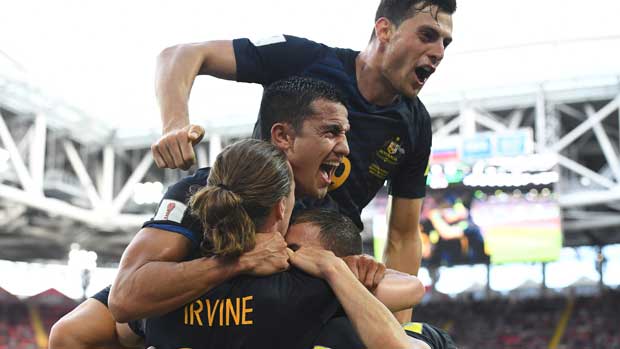 “I was convinced we were going to do it today.

“It just doesn’t feel right at the moment.

“It was impressive against a world class side.

“That’s the measure now. That’s who we want to be measured against.

“We made six changes but we were confident the guys coming in had the energy and knew how we wanted to play.

“And guys like Mass [Luongo], Jackson [Irvine] were unbelievable today and Ryan McGowan …

“I’m just hugely disappointed we didn’t get what we wanted.”