With the Asian Cup in their trophy cabinet, the Socceroos should aim to win every World Cup qualifier they play, according to coach Ange Postecoglou.

Australia will take on United Arab Emirates in Abu Dhabi on Tuesday night (Wed 1.30AM AEST) with both teams having won their opening game of the Asian Football Confederation's (AFC) third phase of qualifying for Russia 2018.

Common wisdom suggests winning at home and drawing away will be enough for the Socceroos to claim one of two automatic qualification spots in Group B.

Plus many coaches would be tempted to go defensive when facing the sweltering conditions of the UAE in early autumn - the temperature is expected to be in the mid-30s at kick-off on Tuesday.

But Postecoglou bristled at his pre-match press conference when it was suggested he might diverge from his normally attacking style at Mohammed Bin Zayed Stadium.

"We will not be satisfied with any result except victory tomorrow," Postecoglou said.

"We didn't come to the UAE to get a point because we are the champions of Asia and we look forward to getting a good victory from the match." 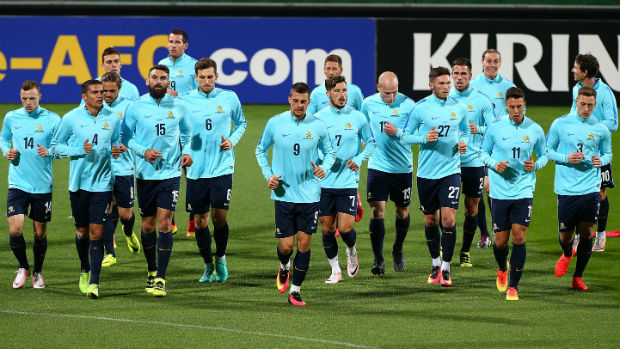 The 51-year-old suggested that no-one in the AFC underestimates the Socceroos more than Australians themselves.

"I think they'd be a bit fearful of us and have every right to be. I expect them to sit back," Postecoglou said.

"Other teams probably hold us in higher regard than we do ourselves."

When asked about the heat, Postecoglou was similarly dismissive.

"There's no one better in the world than Aussies in dealing with this," he said.

"If we do anything that adjusts we might as well play their game and they're better at their game than we are.

"The conditions take care of tempo. There's certain limits the human body can go to.

Australia started Group B with a 2-0 win over Iraq in Perth last week, while the UAE triumphed 2-1 in Japan.